Kylie Jenner & Tyga Spotted Filming Keeping Up With The Kardashians: How Much Tyga Paid By E! To Date Kylie? 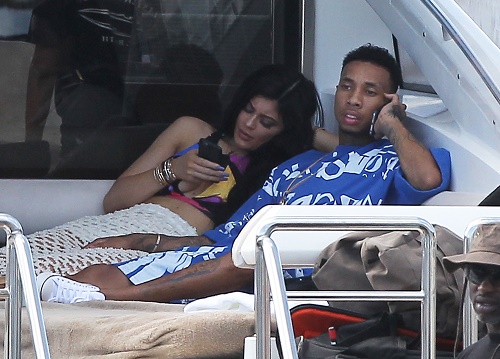 How much is Tyga getting paid to date Kylie? Jenner’s boyfriend Tyga is virtually broke, and he owes hundreds of thousands of dollars to various bill collectors and landlords – the 18-year-old reality TV star is basically his walking cash cow, and now that she is legally an adult, Tyga is cashing in on his barely legal girlfriend.

According to multiple reports, Tyga and Kylie are being followed around by an E! camera crew, and are currently filming scenes for the next season of Keeping Up With The Kardashians. Obviously, Kylie and Tyga’s relationship was illegal until she turned 18 years old – so they couldn’t use it as a storyline on the reality TV show. Now, Kylie is an adult and Tyga can’t get in trouble for having sex with a minor – so Kris Jenner is cashing in on their controversial relationship, and so is Tyga.

Obviously, Tyga is being paid for his appearances on Keeping Up With The Kardashians, which begs the question – has this been his plan all along? Tyga’s rap career has practically flat-lined and he has little-to-no income coming in, except for his reality show “Kingin’ With Tyga,” which is not doing as well as MTV expected.

A source close to the Kardashians dished to CDL, “Tyga has been hounding Kylie and Kris to let him be on KUWTK for months, but the network wouldn’t allow it until Kylie was 18 because they didn’t want to be held liable for their illegal relationship. Kylie’s friends have warned her since day one that Tyga was using her for her fame and fortune – but she doesn’t want to hear it. Everyone thinks it is suspicious that literally the day after she was a legal adult Tyga had a camera crew following him.”

Do you think Tyga is just using Kylie to get on Keeping Up With The Kardashians, and to get a reality TV paycheck? How much do you think he is making just for dating Kylie Jenner? Let us know what you think in the comments below!