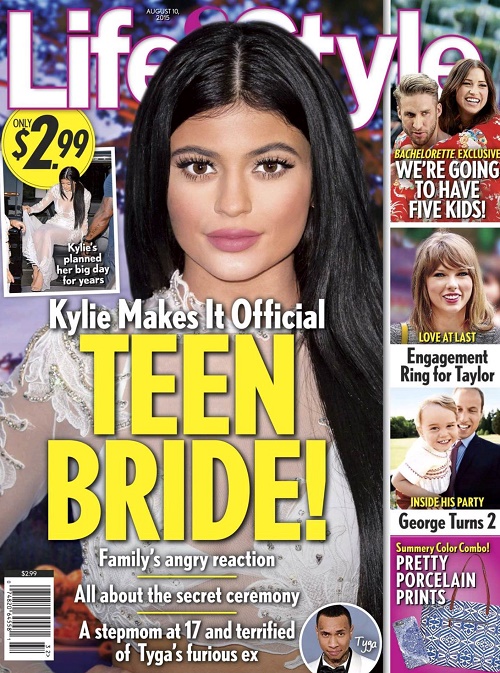 17-year-old Kylie Jenner is officially a married woman! The Keeping Up With The Kardashians star and her 25-year-old boyfriend, Tyga, reportedly got married in a secret wedding ceremony earlier this month – and Kylie has been flashing the wedding ring to prove it. This week’s cover of Life & Style Magazine features a photo of Kylie in a white lacey dress and the headline screams, “Kylie Makes It Official: Teen Bride!” The cover goes on to tease her family’s “angry reaction,” and that she is now a “17 year old step-mom.”

Rumors have been floating around for months that Kylie Jenner and Tyga were preparing to get married and it looks like the controversial couple finally took the plunge. According to Life & Style, Kris Jenner happily gave Kylie permission to marry her boyfriend. She was under the age of 18, so she needed a parent’s consent. Of course, the secret ceremony was kept under wraps – but as soon as Kylie is of legal age she and Tyga will be saying “I Do” in a flashy over-the-top TV wedding, just like her big sisters Kim and Khloe did. No wonder Kris Jenner was happy to marry off her 17-year-old daughter – she is set to make some big bucks off the televised vows.

An insider dished to Life & Style Magazine, “Kylie wants this wedding to be bigger than both of Kim’s weddings, and Khloe’s “I Do’s” to Lamar Odom, and Kris has said that it is totally possible. She wants to sell the TV rights to E! and the photo rights to a magazine. Plus there are countless sponsors who would line up and pay to have their products featured in a Kardashian TV wedding special.”

Kylie already has her wedding all planned out: she plans to have Balmain design a personalized dress for the special occasion, and she has chosen her sister Kendall Jenner as herm aid of honor. Kim, Kourtney, and Khloe will of course be in the wedding as well – and are set to walk down the aisle as bridesmaids. Kylie has decided to have Caitlyn Jenner walk her down the aisle and give her away, but of course Kris is trying to nix the plan and is pushing Kylie to let Kanye West walk her down the aisle instead.

Never one to be upstaged by her own daughters, Kris Jenner is reportedly planning a big wedding too – she and Corey Gamble are preparing to tie the knot. Life & Style teases, “Corey is planning to propose in some exotic location. Kris wants to document it all in a huge wedding special.” Of course, Kris is going to invite Caitlyn Jenner because she knows it will make headlines, and people will be more likely to tune in.

Do you think that Kylie and Tyga are really married? Did Kris give her teen daughter permission to get married just because she saw dollar signs? Will Kylie wind up being a divorcee before she is even of legal drinking age, or do you think she and Tyga might last? Let us know what you think in the comments below!