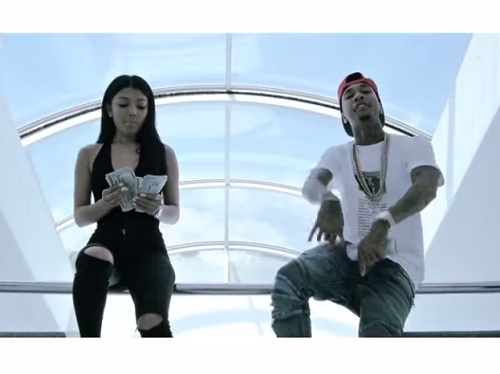 Tyga is at it again: using his 17-year-old girlfriend Kylie Jenner’s vagina to sell his horrible music. We are still trying to clean our ears, and our souls, after hearing Tyga rap about “felony sex” in his song “Pleazer” – which hit the internet so quietly, we’re pretty it has already faded in to “Forgotten Rap Songs That Never Should Have Seen The Light Of Day Oblivion.” We gotta give Tyga credit where credit is due. He didn’t let a little thing like the entire internet making a mockery of him for his scandalous cheating with transgender model Mia Isabella stop him from jumping back up in the saddle and releasing another music video – which will undoubtedly also be mocked beyond recognition.

Tyga’s new single, “Mastersuite,” hit YouTube today, and the rapper brags about how he is chilling in, yup you guessed it, a “Mastersuite.” Tyga also has a girl with long black hair by his side who bears an uncanny resemblance to his underage girlfriend Kylie Jenner. Tyga goes on to remind everyone he had a super-hard life. You know, growing up next door to the Kardashians in Calabasas, he had to “eat McDonalds twice a week!” The struggle…

Ironically, Kylie Jenner will be 18 years old in just a few short weeks and word on the internet is that she has a sex tape in the making – so, pretty soon, Tyga is going to have to find a new vagina to rap about because Kylie’s is going to be old news. Seriously, why listen to Tyga’s horrible music when you could just go watch a video of her?

So, what do you think of Tyga’s new song “Mastersuite?” Feel free to crack jokes in the comment section below!