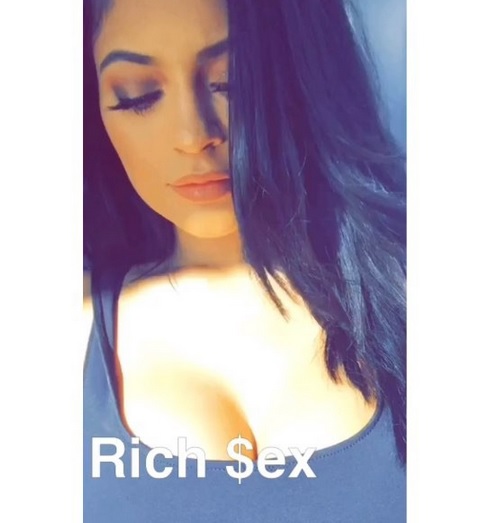 Kylie Jenner’s nude photo shoot is definitely happening, and if the racy videos she has been posting online are any indication, then naked pictures of the Keeping Up With The Kardashians star will be hitting the internet sooner rather than later. And there might even be a sex tape too! In less than two weeks, Kylie Jenner will be 18 years old, and finally a legal adult – and she is clearly going to be giving her sister Kim Kardashian a run for her money.

We have watched the evolution of Kylie Jenner closely over the course of the last year – and as the days wind down until she is a legal adult, Kylie seems to be getting trashier and trashier by the minute. Just last week she was posting videos of herself dancing provocatively on SnapChat and allegedly driving drunk. This weekend Kylie took to social media to once again raise a few eyebrows.

Kylie Jenner created quite a stir online when she posted a video of herself on SnapChat wearing a t-shirt that said “Eat Me Out,” which was supposed to be mocking the In-N-Out Burger chain – but the internet got Kylie’s message loud and clear. A few hours later, she upped the ante and took to SnapChat to post a video of herself listening to Future’s song “Rich Sex” while she made provocative faces into the camera.