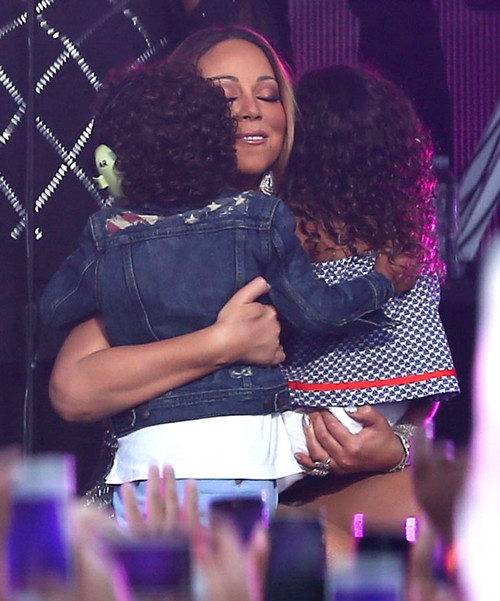 L.A. Reid, the current CEO of Epic Records, has recently spoken out regarding his prized artist Mariah Carey, and you may be surprised at what he had to say. Reid spoke with Billboard Magazine and basically said that he does not have confidence in Mariah Carey’s newest single “Infinity.” The label executive went on to express his doubt in the success of “Infinity,” as a single.

“To even be on the radio at this point in her career is a huge accomplishment, because radio doesn’t cater to veteran artists or legends. Radio caters to the -in-the-moment stars.”

Of course radio is going to play what is in the moment because that is what is going to make the most money, but at the same time, we feel like this is a desperate attempt from L.A. Reid to get the radio to cater to his artist. Every one knows the name “L.A. Reid,” and when radio hears that he feels like they are not paying his artists any attention, they are obviously going to spin their records next.

L.A. Reid also went on to tell Billboard that all entertainers of the past would not be able to get a number one spot in today’s market.

“Nobody that put out records 25 years ago is going to have a No. 1. Not Paul [McCartney], Stevie [Wonder], Bruce [Springsteen], Mick [Jagger], or Keith [Richards]. Not Prince, not anyone. So if she can get on the radio, we’ve done damn good. Would we like to have a number 1? F—yeah, I’m greedy. But it’s not realistic.”

Again, this just sounds like a desperate cry for attention. We wonder how Mariah Carey will respond when she hears that her boss doesn’t believe in the success of her single, especially since Carey recently made the decision to return to L.A. Reid.

Carey opened up to the L.A. Times and talked about her return. “I felt really abandoned by him. I was lost. I really didn’t like being at a place without family. You’ve gotta have people that actually care about you as an artist, that’s first and foremost, and as a person as well. That’s what you get with him. I was kind of like floundering, doing some work that I’m still really proud of.”

We guess Carey didn’t hear that Reid does not believe “Infinity,” is worthy of the number one spot. What do you think of L.A. Reid’s comments? Is Mariah Carey over the hill? Let us know in the comments below.