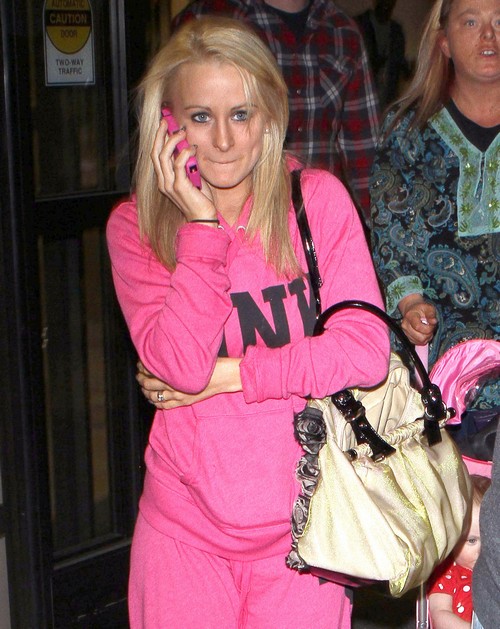 Teen Mom 2’s Leah Messer might just out-trash her co-star Jenelle Evans. Over the course of the past year Leah has been spiraling out of control, was divorced by her husband Jeremy, and is on the verge of losing custody of her twin daughters to her first husband Corey Simms. According to a shocking new report, Leah just reached a whole new level of low – and got caught having sex with Corey!

Corey Simms is happily married to his pregnant wife Miranda, and is using Leah’s stint in rehab to try to get custody of their daughters. According to a new report from Radar Online, Leah and Corey met up to discuss their daughters – and they wound up having sex in the back of his pick-up truck! An insider source dished to Radar Online, “Leah had sex with Corey in the back of his work truck. She was just supposed to meet with him to talk about their daughters, not have sex! Corey has admitted the affair to Miranda. It’s a huge mess and all their friends know about it.”

We’re totally baffled. Why would Corey Simms cheat on his pregnant and practically perfect wife Miranda, with Leah Messer, someone who has done him so dirty in the past and according to him is a horrible mother to his children. Leah is currently living with her new boyfriend T.R. Dues – who probably isn’t thrilled that she cheated either, but at this point no one should be surprised by what Leah does anymore.

Sadly, they have already finished filming Season 6 of Teen Mom 2, so we aren’t going to get to see all of this drama go down on the MTV reality show. Are you shocked by what Leah and Corey did? Is there a chance they could leave Miranda and T.R. and get back together? Let us know what you think in the comments below!