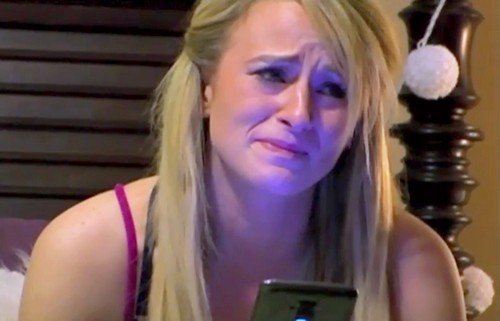 Even though Leah has completed a 30-day inpatient rehab program a judge decided it’s time for the twins father Corey to have the girls full-time – this order became effective on October 13.

A family insider told In Touch Weekly on October 21 that “Leah only gets the girls on weekends now.” A judge looked over the twins school records and discovered they had been late for school many times. That’s when he ordered the change in custody.

This isn’t the first time Simms has sued Messer for custody of their children. In 2014 the couple went to court when it was rumored that Leah Messer was abusing prescription medications. A drug test came back negative and the judge in that custody hearing left the custody order in place. But according to a source, “Leah’s really been screwing up since then, so Corey took her back to court.”

There is also concern for the safety of Leah Messer and Jeremy Calvert’s daughter Addie. If Calvert can find a job closer to home he will sue for the same arrangement as Corey Simms. “Everyone is very worried about Addie. She recently wandered out of the house while Leah was distracted. Thankfully, a police officer found Addie and brought her back home,” the source close to the family claims.

Why would the police officer just return Addie to Leah’s custody after finding the child roaming the streets? Why wasn’t she immediately removed from Leah’s care pending an investigation? Jeremy Calvert’s current job keeps him on the road for weeks at a time – but if he is so concerned for his daughter’s safety he should appoint someone to go to court on his behalf to get custody of Addie. Especially now that Messer has lost primary custody of her twin daughters to her Corey Simms.

If the families of the little girls are afraid for their safety shouldn’t they have intervened before Leah Messer was given only weekend visits with her Ali and Aleeah? What do you think is really going on here? Is the “Teen Mom 2” star really a terrible mother?