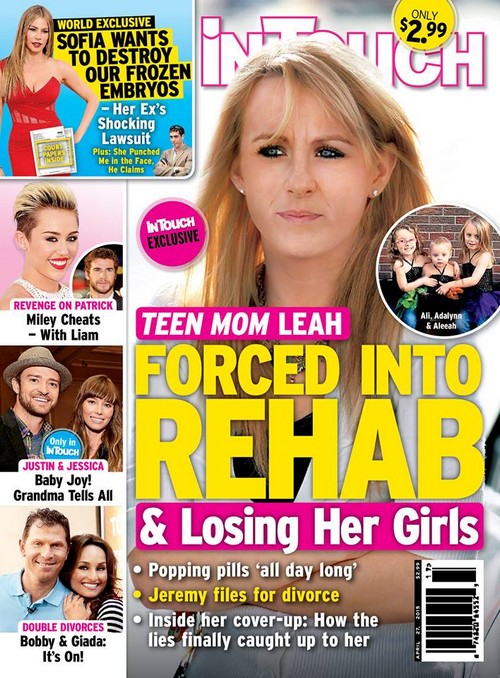 Teen Mom 2 star Leah Messer’s husband Jeremy Calvert has officially filed for divorce from the troubled mother of three. And, it gets worse. Leah Messer is apparently being shipped off to rehab and losing custody of her three daughters Ali, Adalynn and Aleeah – according to the April 27 cover of In Touch Magazine.

This week’s cover of In Touch Magazine features a photo of Leah Messer, accompanied with the headline “Teen Mom Leah Forced Into Rehab And Losing Her Girls.” In Touch’s cover goes on to say, “Popping pills all day long, Jeremy files for divorce, Inside her cover-up: how the lies finally caught up to her.” This isn’t the first time that Leah and Jeremy have broken up and it is not the first time that her pill problem has been leaked to the tabloids.

Leah Messer skyrocketed to fame on the reality TV show 16 & Pregnant, and then went on to star on several seasons of Teen Mom 2. Over the years viewers have watched Leah struggle with being the teen mom of twins, her attempts to cope with her daughter’s disabilities, her break-up with her first baby-daddy Corey, and then her second pregnancy and marriage woes with Jeremy Calvert. We’re not condoning prescription pill abuse in any way – but we can see why Leah would be stressed enough to turn to drugs as a coping mechanism.

Will Leah Messer lose her daughters? Well, in the more recent season of Teen Mom 2 the series followed Leah as Corey and his new wife took her to court over custody. If In Touch’s story is accurate and Leah is heading to rehab, then that is exactly the ammunition that Corey needs to take her to court and get custody of their twin daughters. Do you believe that Leah Messer has a drug problem? Will she get the help that she needs? Is her marriage to Jeremy Calvert really over this time? Let us know what you think in the comments below!