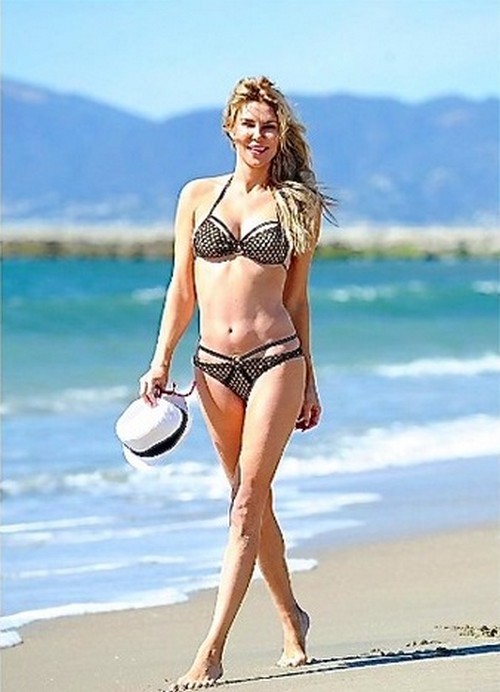 During a well-publicized photo shoot, RHOBH’s star Brandi Glanville recently wore an Agent Provocateur bikini. Guess who ran to hunt down and purchase the exact same swimsuit? LeAnne Rimes, that’s who. LeAnn Rimes then arranged for her personal paparazzo to photograph her wearing Brandi Glanville’s suit on the beach. LeAnne Rimes is clearly not running on four cylinders.

Brandi Glanville, a former Elite model, has long stated that her favorite lingerie label is Agent Provocateur. She recently donned their newest bikini at a beach photo shoot. The results were seen on many websites and picked up by the Daily Mail.

This is not the first time LeAnn Rimes has ran to find the same bikini worn by model and author, Brandi Glanville. In fact, it’s more like the dozenth time. If Glanville’s suit is four seasons old, Rimes will hunt it down leaving no stone unturned and she will find it! One can only imagine her search engines flying to locate Glanville’s apparel of choice. 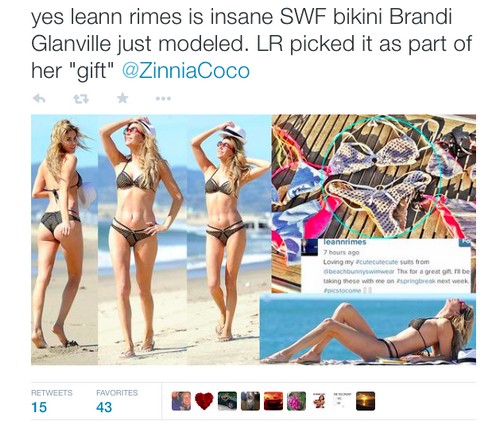 The psychosis of Rimes SWFing of Glanville’s swimwear alone is surely worthy of independent psychiatric study. What does she hope to gain? Rimes will never be a leggy runway model. Rimes will never have the willowy frame or the dancers body. Frankly, she’s a bit mannish in her build, broad back, short legs, flat chest wall, and no defined waist. Why does she keep calling her personal paparazzi to take photos of her in bikinis? Even though ten years younger than Glanville, it never quite works. The desperation of calling the same paparazzi that Glanville so studiously avoids is also odd. Don’t celebrities try to avoid paparazzi photos? The entire event is disquieting in far too many ways to mention in this short post.

To “Single White Female” another woman is one thing. To do so, to the mother of the children you step-parent is frightening. To do so after being exposed, years ago here and on many other sites, and here at CDL only a few weeks ago, is mindboggling. To hire a photographer to document oneself in the act of stalking and copying another woman’s life and wardrobe questions sanity. To then sell the photographic proof of that stalking, copying, and insanity brings it to a level until now unknown and unheard of. Yes, wanting the world to see you are SWFing your husband’s ex-wife is something we can only expect from the crazy that is and always will be LeAnne Rimes.