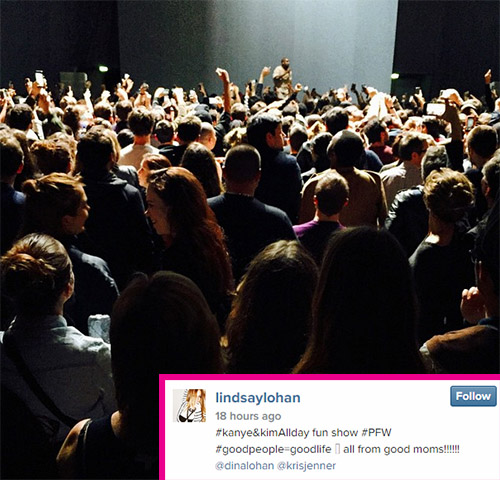 Lindsay Lohan has been away from the spotlight for a few months, and like an addict, of course she was beginning to crave the attention. Thus, is it a surprise that she would go and think of the most controversial way to put herself back in the limelight? Either that, or she’s just an idiot.

Lindsay Lohan watched Kanye West perform in Paris on Tuesday, and she uploaded a picture of Kanye on Instagram with the caption, “#kanye&kimAlldayn*gga$ fun show #PFW #goodpeople=goodlife all from good moms!!!!!! @dinalohan @krisjenner.” However, Lindsay ended up editing the ‘n*gga$’ out of her post immediately, but the damage had been done. Fans noticed the comment and the image soon went viral, netting Lindsay her first major stint in the spotlight since she became ‘clean’.

There are two ways to look at this – one if that Lindsay Lohan really is that racist and stupid, and that she didn’t realize what she was writing until she had already uploaded it. Obviously, she has enough fans and people running her Instagram account that someone would have commented on it immediately, hence the rapid-fire editing.

The second option is that Lindsay isn’t as stupid as the post made her look, and this was a contrived method to land more attention. Using the n-word, even though it comes with its share of controversies, definitely did get her attention – and isn’t that what Lindsay Lohan is always aiming for? I mean, everybody already hates her, so she might have assumed that she really couldn’t go any lower. And she’s right – this doesn’t come as a surprise or a shock, but more of a reminder that Lindsay Lohan still exists and still says and writes idiotic things.

What do you guys think about Lindsay Lohan uploading a picture and captioning it with the n-word? Was the use of the n-word intentional or unintentional on Lindsay’s end? Let us know your thoughts in the comments below.