Lindsay Lohan Moves To London To Be An Actress: UPDATE – Slips Off Wagon and Still a Tabloid Sensation (PHOTOS) 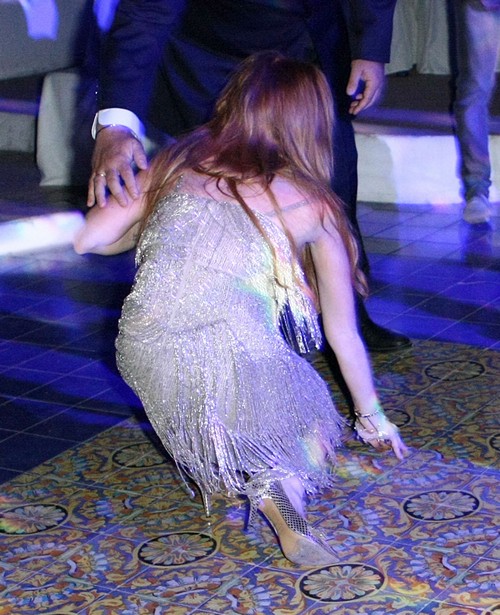 Lindsay Lohan is ready to let go of her partying ways and wants be known only as a good actress. She thinks London is the perfect place for her new beginning. “I want to be known for my talents and my work that I create, rather than a tabloid sensation. However long it does take, I’m willing to do it. I’m will to work for it,” she recently said in an interview.

The Tabloid queen is currently in London preparing for her West End debut in the play, “Speed-the-Plow.” She admits the play will be a challenge for her but she’s finally at a place in her life where she can fully commit to the 10-week engagement.

Lindsay has been known to be difficult to work with. She butts heads with producers, directors, and co-stars. She’s late to set or sometimes doesn’t even show up at all. The celebrity lifestyle of endless parties and easy access to drugs and alcohol has always seemed to interest her more than the work. But Lindsay hopes to change this perception of her.

“For a long time, people looked at me as kind of a celebrity, which is something I never wanted…That’s not what I got into this industry for. I’ve been doing this since I was 3 years old and I’ve been on set since I was 6. People kind of forgot that,” she said in a BBC interview.

She’s now ready to show everyone what she’s really capable of. “And what better than to do it with the great people that I’m working with on stage in London…so that people can focus on the fact that I’m in this industry because I’m an actress and an artist and not just someone you take photos of?”

She even dismissed the idea of her missing rehearsal or shows. “That’s not going to happen. That’s not on the cards. It’s not.”

Lindsay also seemed to blame Los Angeles for her troubled teens and 20s. “In LA, when people go out at night, that’s all you do.” Lindsay made the move to LA from NY in her late teens to take full advantage of her growing fame and movie career. She also revealed that she was also trying to run away from problems at home. It couldn’t have been easy growing with Dina and Michael Lohan as parents.

There was a time when you couldn’t turn on the TV or open a magazine without hearing about Lindsay’s latest arrest, a recap of her drunken night, seeing her in court, or learning that she’s back in rehab. But she promises these days are behind her and she has no regrets.

Since she claims living in LA played a huge role in her bad girl image, she also hints that London may become her permanent home.

“I think I am making the move to come over here…I’ve noticed when I’m watching the news here and such, you guys have such a different outlook. In the U.S., starting at 5 p.m., it’s TMZ and all of these shows that are just talking about people’s personal lives that are in the industry. Here, I don’t notice any of that. It’s more news and politics and music. It feels really good to be able to turn on the TV and not see everything be about gossip,” she told the BBC.

Do you think Lindsay will do better in London? Has she finally left her partying ways behind her and can rebrand herself as a respectable actress? Join the conversation and leave a comment.

Troubled actress Lindsay Lohan attends a film festival dinner where she got into an argument with a paparazzo and later fell down on July 14, 2014 in Ischia, Italy. Lindsay’s behavior and her trip to the floor has led people to speculate that she’s going to fall off the wagon again… if she hasn’t already.