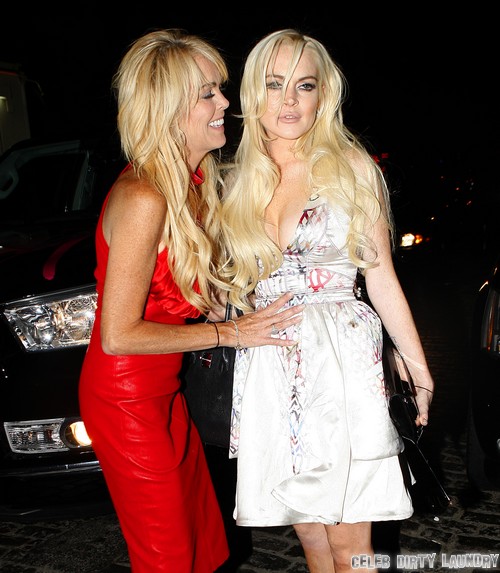 By now you all know that Lindsay Lohan has successfully concluded her sixth rehab stint and she is quickly integrating herself back into normal society. In the week since her release she has had her new film, The Canyons completely flop, she did a pretty good job hosting Chelsea Lately and she has sat for an interview with Oprah Winfrey that is set to air on Aug. 18th.  I think Lindsay’s demeanor in that interview will kind of give the public an idea of how she really is doing.

In the past we have seen Lindsay side step the hard questions or else make a joke about them. This time out if she seems a bit more open then maybe the 27-year old will prove that she has really learned something and is looking to stay sober. Those close to the once popular actress think that in order to keep herself together she’ll have to cut her mother, Dina Lohan out of the picture all together.

Dina has been out and about all over town completely drunk. She attended a function thrown by Russell Simmons and ended up so blitzed that she could barely stand up to leave.  Lindsay is supposedly cutting out people that party heavily and choosing to put herself in more sober situations which sounds like the polar opposite of what her mother is doing.

Dina Lohan is said to have been Lindsay’s biggest enabler in the past. Do you think that Lindsay will be smart enough to keep her distance or is it only a mater of time before Dina and all of those old vices suck Lindsay right back in? Tell us your thoughts in the comments below!