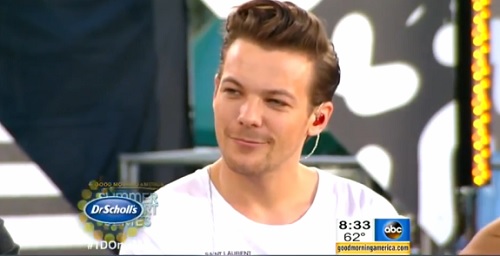 Since People Magazine confirmed that One Direction’s Louis Tomlinson is going to be a dad, everyone has been buzzing about Briana Jungwirth’s pregnancy. Everyone, that is, except for Louis Tomlinson. Although his fellow One Direction bandmates have discussed the big news about his baby on the way, Louis himself hasn’t actually spoken out on the pregnancy, or even really confirmed it. But he had no choice but to acknowledge the baby news during One Direction’s appearance on Good Morning America – and it was super awkward!

The remainder of One Direction: Louis Tomlinson, Niall Horan, Harry Styles, and Liam Payne took the stage on Good Morning America on Tuesday, August 4 – for the first time since 2013. The band promoted their new single “Drag Me Down,” and discussed life after Zayn Malik.

During the interview, Michael Strahan awkwardly congratulated Louis Tomlinson on his future baby and stated, “Louis, from one father to another I want to congratulate you on your upcoming fatherhood.” Of course, the diehard fans in the audience squealed with delight. Louis didn’t seem to thrilled about being put on the spot and he sheepishly responded, “It’s a very exciting time, so I am buzzing. Thank you.”

The fans in the audience and Michael Strahan waited for Louis Tomlinson to elaborate – but the One Direction singer didn’t say anything else about Briana Jungwirth’s pregnancy and they quickly moved on to another topic. This is the first time Louis has even publicly confirmed that he does have a baby on the way, although it wasn’t exactly a secret. He may just want to handle the matter privately, or there could be some serious drama going on behind the scenes seeing as how he and his future baby-mama are “just friends” and not even in a committed relationship.

What do you think of the awkward moment on Good Morning America? Why doesn’t Louis Tomlinson want to discuss the pregnancy? Let us know what you think in the comments below!