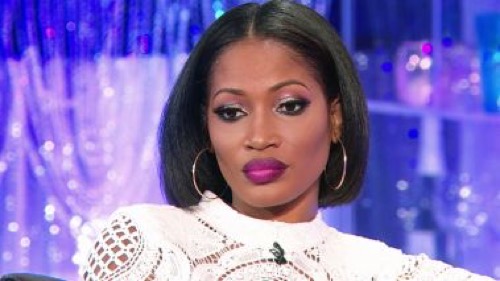 Tonight on VH1 their series Love & Hip Hop Atlanta continues with an all new Monday August 31, season 4 episode 19 called “Reunion Part 2” and we have your weekly recap below. On tonight’s episode, a post-Season 4 reunion: Mimi takes care of unfinished business; things become heated between Nikko and Stevie;

On the last episode, part 1 of 2. Series executive producer Mona Scott-Young hosted this reunion edition featuring the regrouped cast and a reflection on Season 1 dramas. Did you watch last week’s episode?  We did and we recapped it right here for you.

On tonight’s episode as per the VH1 synopsis, “a post-Season 4 reunion: Mimi takes care of unfinished business; things become heated between Nikko and Stevie; Karlie’s loyalties are questioned; Joc’s skeletons are revealed; and Stevie and Joseline have explosive revelations of their own.”

Stevie smiles and says it looks like tonight is going to be a good one for him.

Nina Parker asks her what made her think she was qualified to manage artists. She says she’s been around the business for a long time and has a lot of connections.

[Host] asks Dawn if she thinks that Mimi is qualified.  Dawn says that some things are better left unsaid, but this is a totally different arena from what Mimi had been doing in her previous job.

[Host] asks Dawn about attempting to steal Mimi’s first client ever, Jessica Dime. Dawn says she didn’t even know Mimi had her as a client, and she should have consulted her because they were close.

Mimi says she had many things lined up for her, including artist development and endorsements. Foxx says if she had that, she should have provided that for her instead of working with Dime. Mimi says the only thing she did for Dime was a track.

Mimi says she figured Jessica was salty so she did what she did. Jessica says she never checked up on how she was doing or was aware of what she was up to. Mimi admits, however, that the performance was good and she can’t say anything about that.

Clips of Momma Dee and Ernest’s relationship issues are replayed.  Parker asks Momma Dee when she and Ernest met – 1995.

Parker then asks her about the past career as a pimp she had talked about, and she says that yes, she did do that and it was hard. The host asks if she started before or after she met Ernest. Momma Dee says it was after, because he taught her the game, but he learned a lot from his stepfather. Momma Dee says in life we all make mistakes, and when Ernest took seven years of his life to think about what he’d done, it was justified. Parker asks Bambi what stage she is in her relationship with Scrappy right now and if she wants to upgrade. Bambi says she’s just chilling right now, and Scrappy says “she’ll get an upgrade.” Parker asks Momma Dee if she approves of that, and she says yes.

Nina Parker asks Scrappy what happened between him and his baby mama, Erica.  He says they had made an agreement about child support and everything was fine until she randomly started demanding $5,000 instead of the $2,000 he was paying.  Erica says Scrappy lies about everything, and that he was paying only $500 and then just wanted to pay $150 a month and he couldn’t even do that in all of 2013.

Momma Dee says her son was the best dad and that she wishes she had a daddy like her son because then maybe she would be a better person.

Erica says Bambi’s opinion in this matter is irrelevant to her because she has nothing to do with it, and when Bambi starts responding, Erica tells Bambi to pay the child support.

Scrappy says Erica has a man who plays basketball and that he doubts she’s a good mother. Erica, however, admits Scrappy is a good father when he’s with her. Scrappy says he doesn’t care what she says.

Momma Dee says if you don’t’ want a baby, put a condom on it. Scrappy stands up and says that he put them on TV and she is still talking shit about him.

Kelenna’s struggles throughout the season with her postpartum depression, career and relationships are recounting.

Parker asks her how she’s doing now, and she says she feels good and it’s been a really therapeutic year for her. She says it’s more emotional to watch clips like that because it’s a real story, and it was hard.

Kalenna says that Debra calling her garbage when they met to talk about her career was hurtful. Debra says she didn’t call Kalenna garbage, but rather said she was bringing her garbage and had an attitude because she was going through things in her personal life.

Debra says she believes Kalenna is going through postpartum because of how she acted (crying all the time, about everything), and that if she and Tony are having difficulties that’s not her fault.

Debra says she came in to do a favor. Kalenna says she loves her and invites her to hug. Deb hugs her and they make up.

The fight between Rasheeda and Kalenna is discussed. Joseline says Rasheeda wasn’t going to do anything and that K Michelle came at her and she didn’t do anything. Kirk says Rasheed and K Michelle have made up, so people need to let it go and stop bringing it up all the time. Rasheeda says the feud was just a bunch of petty shit and a lot that goes on isn’t seen. She says she wasn’t dogging Kalenna or talking about her finances, and that she’s been a true friend.The two of them agree that it’s petty. Debra says that if no one opened their mouths none of this stuff would be going down.

Erica asks Bambi how she can just insult her and then turn around and say she loves her daughter, who is a product of her. When everyone applauds at this, Scrappy tells them not to clap for her.

Margeaux mocks Stevie for his all red outfit and calls him a fuckboy repeatedly. She asks if she really thinks he makes good music with his wife. Stevie asks her why she is even here, and she says she’s here to speak the truth. However, she storms off the stage just a few seconds after that point.

Backstage, Margeaux and Nikko drag everyone. Margeaux asks why she would be intimidated by Joseline when she can’t even articulate a sentence (“she can’t even speak to me,” she says). Nikko says they look like clowns in a circus before the couple storms out, extraordinarily butthurt.

Stevie and Joseline give a special three-song performance.

After Joseline thanks Stevie, Mimi gives a touching speech asking Joseline for helping them achieve their dreams by coming between she and Stevie. She says she doesn’t want Stevie, but rather a friend and that she considers him and Joseline to be family. Joseline tears up and the two of them hug.