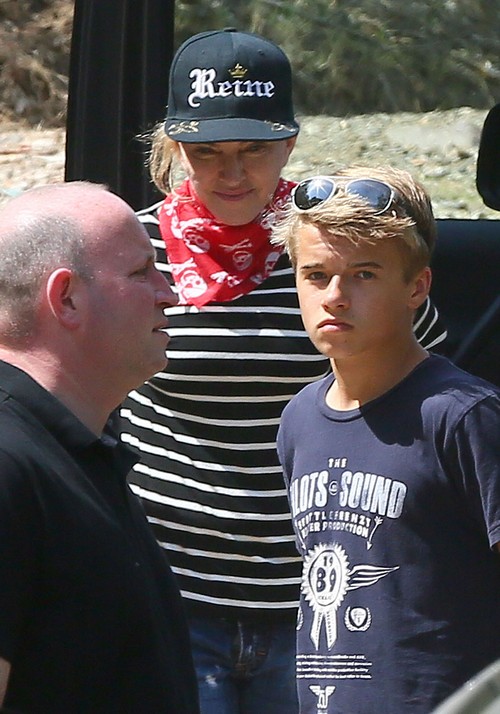 Is a nightmare custody battle brewing for Madonna? Rocco Ritchie, the singer’s 15-year-old son, defied a court order to return home. Instead the teenager spent the holidays with dad Guy Ritchie in London.

Rocco is tired of life on the road with mom and the almost 16-year-old ran off to London to be with dad, stepmom Jacqui Ainsley and halfsiblings Rafael, Rivka and Levi. Madge wants Rocco home in New York, filed an emergency petition on December 23 in New York City.

A Supreme Court Justice agreed and issued an order for Rocco to return home.

A source close to the custody case revealed to Page Six that Rocco has absolutely no intention of obeying the judge’s order. “[Rocco] has expressed very clearly that he does not want to return to New York,” the younger Ritchie’s attorney Eric Buckley told Judge Deborah Kaplan before the order was handed down.

That didn’t stop the music icon from posting a message to Rocco via Instagram on Christmas Day. “Merry X-mas to the Sun-shine of my life,” a photo of Rocco and Madge was captioned. Many followers commented that megastar should just let things be, let things cool down and allow ex-husband Guy spend time with their son.

One Instagram follower advised that Rocco is at an age where the young man needs a father’s influence more than ever.

As previously reported, Rocco Ritchie ran away while Madonna was on tour in Stockholm in mid-November. The young man boarded a plane and went home to dad in London. A source revealed all Rocco wants is to spend time with Guy and get off the road – Rocco is tired of the endless touring with Mama Madge.

Because Madonna and Guy Ritchie’s divorce and custody agreement was registered in New York upon the couple’s divorce in 20009, the custody dispute belongs in New York. A source revealed that Judge Kaplan advised Madge to discuss the dispute with Guy before everyone has to return to court in a few weeks.

There is also a pending court proceeding in the United Kingdom as well. Rocco Ritchie is represented by his own attorney. At nearly 16-years-old Rocco is old enough by British and United States standards to choose whether or not he wishes to live with Guy Ritchie or Madonna.