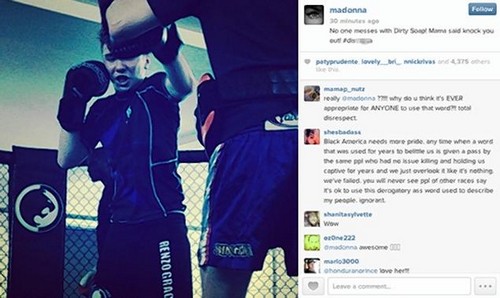 Madonna’s idiocy reared it’s Botox infused head once again. Like most proud parents she posted a picture of her Son Rocco boxing to her Instagram account. Nothing wrong with that right? She decided to caption the picture “No one messes with Dirty Soap! Mama said knock you out!” Still nothing wrong there, but then she takes a nose dive into an ocean of stupid when decides to adds hash tag “#disni–a.”

Of course the wrath was swift and ferocious. The singer then decided to defend herself by dropping this literary gem….”Ok let me start this again. #get off of my d–k haters!” Well, somewhere along the line someone who actually has two brain cells to rub together took control and issued an apology.

“I am sorry if I offended anyone with my use of the N word on Instagram. It was not meant as a racial slur.. I am not a racist. There’s no way to defend the use of the word. It was all about intention… It was used as a term of endearment toward my son who is white. I appreciate that it’s a provocative word and I apologize if it gave people the wrong impression. Forgive me.”

There are several issues here at play. The first is the actual issue of the N-word, who can use it, and who cannot and why. Let me introduce for those who are unfamiliar, the concept of in-groups and out-groups. Groups of people bond over shared experiences and categorize themselves as such. When an outsider, for lack of a better term, attempts to infiltrate the in-group they may ultimately be accepted, but still not afforded the same privileges as those who have already formed a strong bond and use of that word is one of those privileges.

That is precisely the reason Brandi Glandville recently inserted her gigantic foot into her foul expletive laced mouth. It’s okay for black girls to joke about their hair because they share that experience, they have bonded over that experience and yes, they can make jokes about that experience which would be offensive coming from someone who does not have the same frame of reference.

I said all that to say this: members of the out-group trying to appropriate a sub culture and lingo cultivated via painful shared experiences is shameful and offensive. I’m sorry if members of the out-group feel its unfair; it isn’t a hard concept to grasp, perhaps hard to accept, but not hard to grasp. Lets make this easy, Even if you’re Brandi Glandville and one of the many black dudes that you’ve copulated with tells you it’s okay… please refrain from culture appropriation; especially in public. M’Kay?

The second glaring issue here is the use of social media by celebs. When will they learn? I’ve always considered social media to be something that us lowly masses use to amuse ourselves. If I had an unlimited amount of funds at my disposal, I sure as hell wouldn’t be on Twitter showing my lack of intelligence by posting ignorant things that I first feebly try to defend but ultimately admit are wrong via a statement from a publicist. This world is infinite and it’s treasures just as endless, Madonna should spend her time exploring them rather than behaving like an ass on Twitter.

The third issue is Madonna’s pathetic infatuation with youth. I get that in Hollywood youth is a prized possession, it’s the nature of the beast. If Madonna wants to look like the guy from House of Wax got a hold of her, fine, it’s her face. However, looking young and acting young is an entirely different matter. What adult would even let the words #get off of my d–k haters!” ? Glide past their mind without feeling an acute sense of shame. Madonna is like 110 years old going on 10, and it’s not hot. My advice, summon whatever social grace you can muster, GROW UP, and for the love of God please stop showing your stupid on social media.