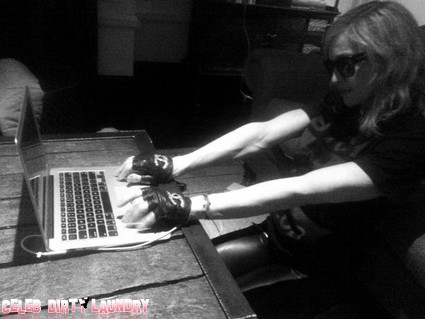 Justin Bieber has bagged an invite any singer would kill for…a request to work with Madonna. Yes, Selena Gomez better watch out because the notorious 53 year old cougar is stalking her boyfriend online!

The Material Girl’s invite came during last night’s Twitter chat with fans. It’s the first time Madge has used the social networking site and she received tens of thousands of questions, compliments and queries. One fellow tweeter asked her what she thought of the tween superstar. She tweeted back ‘I’m a huge fan. I love it when he raps.’ Just as well she was diplomatic….not long after the Biebster himself popped up …’Seeing that is a huge honor. Yours is a career artists dream of. Congrats on the new album!‘

Madonna is the Queen of publicity – good or bad – so she seized the moment and offered JB the chance of a lifetime ‘Come and join me on stage when I’m on tour when we are in the same city and congrats on your new single‘ And with just one sentence two of the biggest names in music essentially hooked up – professionally of course. So somewhere on her upcoming MDNA tour expect to see the teen enjoying his 15 minutes of ‘Madonna’ fame. And expect to see a very over protective Miss Gomez keeping an eye on the maneater!

Justin wasn’t the only celebrity who tweeted Mads and got an answer. Ryan Seacrest bobbed up, so did Ellen DeGeneres and Deadmau5. Celeb Dirty Laundry covered their online chat about her supposed endorsement of drugs here Madonna Fires Back at Deadmau5 Over Ecstasy Comments