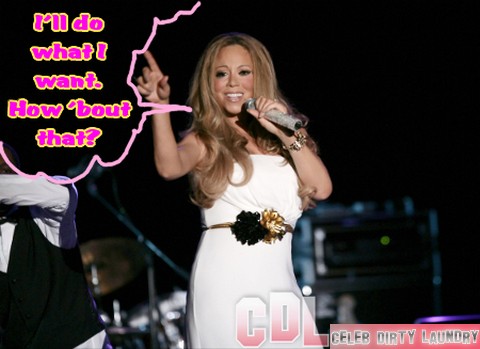 Are you sad that American Idol is coming to an end after such a long run on television? Well, Mariah Carey isn’t. The legendary songbird, and former Idol judge, is not sad at all, and is happy to see the show go. She even goes as far as saying that American Idol was the “worst experience of my life.”

Mariah Carey recently sat down and spoke with Kyle and Jackie O on their radio show in Australia on Thursday, May 27, and the singer had nothing but bad things to say about her time on American Idol.

When asked if she would return for the last season of American Idol, Mariah Carey responded by saying, “That was the worst experience of my life. I’m not going to get into what it was. Let’s just say, I don’t think they had any interest in us having a good experience through that show [talking about Nicki Minaj]. Pitting two females against each other wasn’t cool. It should have been about the contestants instead of about some non-existent feud that turned into even more ridiculousness. I would never be involved again.”

Mariah Carey appeared on American Idol with Nicki Minaj, Randy Jackson, and Keith Urban back in 2013, and made headlines thanks to her apparent feud with fellow judge and rapper Nicki Minaj.

Carey was very open and spilling all the beans regrading Idol. She said that the judges are told to “Make up things to say about the contestants. Half the time, the performances are good. You just be like, ‘It was good,’ but felt compelled to embellish more for TV.” She ends her remarks by saying, “…but everybody else can like it.” Wow, Carey must have really hated her time on American Idol. Although, she should be a little more grateful considering the show cut down the amount of episodes and production to meet her ridiculous asking price.

We hope that Mariah Carey is not under any nondisclosure agreements with American Idol, because if she is, talking this poorly about the reality show will surely result in a lawsuit.

What do you make of Carey’s comments? Let us know in the comments below.