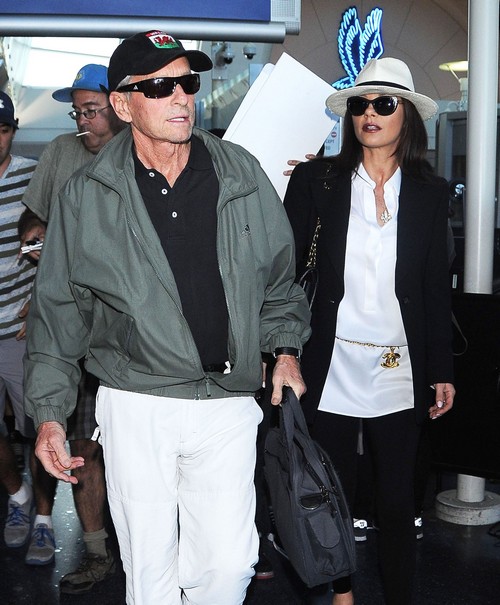 Michael Douglas and Catherine Zeta-Jones are fighting bitterly and heading for divorce accoding to recent reports. The racquet you expect at tennis tournament has strings and a handle – but Michael Douglas and on-again wife Catherine Zeta-Jones delivered quite a racket of their own at the recent US Open. Michael and Catherine took their daughter Carys Douglas (12) out for a family day at the famed tennis tourney in New York but the event turned into much more of a spectator attraction than the match below. Could Catherine’s mental state be the issue?

The National Enquirer quotes a source that said, “Catherine was goading him. She was laughing at him and Michael’s face turned angry. You could feel the tension between them.” The tabloid also cited a body language expert who said, “Catherine is domineering and combative. He’s constantly looking away in avoidance of her abuse.” Could it be that Catherine Zeta-Jones’ bipolar disorder is once again out of control and wreaking havoc on her marriage to the aging actor?

Zeta-Jones admitted to the UK Telegraph that, “I torture my husband and everyone around me with my nerves and anxiety.” This behavior seems evident at the tennis outing with her hubby. Michael Douglas admitted in an interview, “It’s a slippery slope, this bipolar stuff.” It was just a couple of months ago that Catherine Zeta-Jones had a reported bipolar meltdown on the busy streets of Manhattan that had her husband worrying she was mixing her medications with alcohol or off her psych meds altogether.

While the two actors may have been giving each other the cold shoulder after arguing at the US Open, what’s clear is they were both doting on Carys Douglas. Zeta-Jones joked and cuddled with her daughter, laughing at silly faces the 12 year old made, but was all grim faced when she turned to her husband. Or perhaps what’s weighing on Catherine is the nasty comments Michael Douglas made essentially blaming her for his throat cancer.

Soon after his diagnosis, Michael did some press about his illness and blamed the type of throat cancer he developed on performing oral sex. And it is true that you can contract cancer from mouth on lady parts contact with someone who has HPV which is a sexually transmitted disease. Rumors swirled at the time that either Michael Douglas was implying that his wife Catherine Zeta-Jones had an STD and, as a result, gave him cancer – or that he was admitting to infidelity.

Neither intimation is something a woman struggling with mental illness needs to hear from her husband in a very public admission. This negative attention could have sparked the bipolar meltdown the same year as that interview and statement that triggered Catherine to check herself into residential treatment for her bipolar disorder. It was after Douglas’ STD-cancer faux pas and Catherine’s second stay in rehab that the duo separated and spent roughly six months apart.

But the couple’s reconciliation was rumored to be solely for the sake of their children. Michael Douglas apparently continues to blame himself for son Cameron Douglas’ drug addiction and incarceration for drug-related felonies involving methamphetamine. Michael’s ex Diandra Douglas blamed absentee father issues for her son Cameron’s addiction issues and the actor has admitted he was busy working and missed a good bit of his son’s childhood.

It’s no surprise then that Michael Douglas may be willing to tolerate Catherine Zeta-Jones’ antics if it means sparing Carys and Dylan the problems that his oldest son has struggled with – Cameron remains in Federal prison and won’t be eligible for release until 2018. This alone is enough to have Michael overlooking Catherine’s bipolar spirals as he struggles to keep their marriage together for the kids. Looks like it’s game-set-match Zeta-Jones, at least for now.