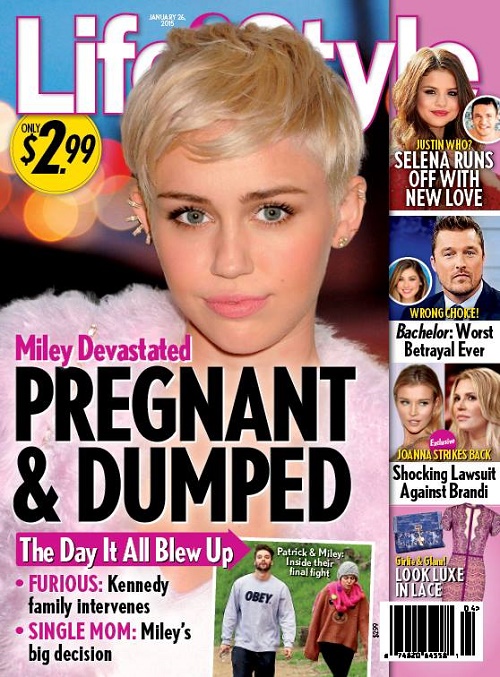 Miley Cyrus and Patrick Schwarzenegger have been dating for a bit now, but is Miley pregnant and forcing Patrick to call off the relationship? The latest cover issue of Life & Style Weekly claims that Patrick dumped Miley after pressure from his family became too much to handle!

It’s common knowledge that Maria Shriver is not a fan of Miley Cyrus, especially after her son was photographed partying and smoking pot with her. Miley’s reputation precedes her, and I don’t think any mother – least of all someone belonging to the Kennedy clan – would be happy about their son dating Miley Cyrus. However, it seemed like Patrick was not paying any heed to his mother’s warnings, since he and Miley were reportedly together during Golden Globe weekend as well. However, Life & Style’s sources are now saying that not only did Patrick Schwarzenegger dump Miley Cyrus, but he’s broken up with her after finding out that she’s pregnant. Um….

Would Patrick dump Miley or break up with her after finding out that she was pregnant? If anything, I’d assume that they would jump into a marriage right after that. Sure, Miley Cyrus claims she’s an independent woman, but this is the Kennedy family we’re talking about – no way would they be amenable to the idea of a Kennedy baby being raised out of wedlock, regardless of who the mother was.

Life & Style also has a feature on Selena Gomez’s rebound boyfriend from Justin Bieber [who will probably last all of five seconds], Joanna Krupa’s lawsuit against Brandi Glanville, and the Bachelor Chris Soules’ final choice.

What do you guys think about Life & Style’s cover story? Do you think Miley Cyrus is pregnant, and did she break up with Patrick Schwarzenegger? Let us know your thoughts in the comments below.