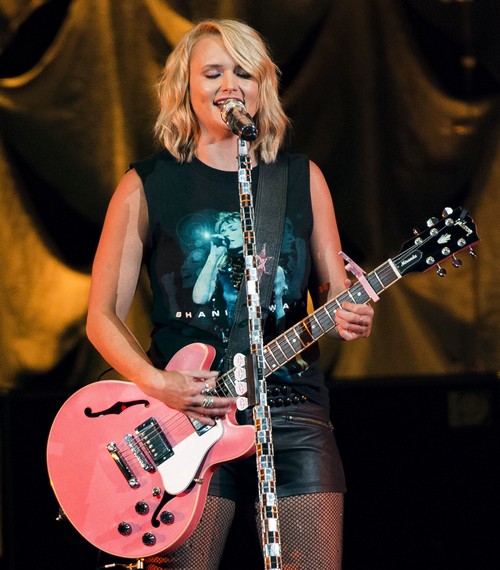 Miranda Lambert is outraged after Gwen Stefani took their feud to a whole new level and is now flaunting her relationship with Blake Shelton by flirting with him nonstop on television and making out with the country music star whenever she thinks it might get caught on film.

Miranda cannot believe that Blake moved on so quickly after announcing their divorce. Miranda feels like the timing on Blake and Gwen’s new relationship is really sketchy and now the “Little Red Wagon” singer is starting to get really angry about Shelton’s new woman.

Lambert feels like Gwen is trying to get under her skin when the No Doubt singer is extra flirty with Shelton on “The Voice.” Not only that but stories of Gwen Stefani and Blake Shelton’s relationship are everywhere and Miranda can’t even avoid the lovebirds out in public.

It wasn’t an accident that Blake and Gwen went public with their relationship right before the Country Music Awards on November 4. Before the awards show, there were rumors of a hot new romance but both of “The Voice” coaches had denied the relationship and claimed to just be great friends.

It was pretty underhanded of Blake and Gwen to announce their relationship immediately before going together to the 2015 CMAs. Miranda Lambert was performing that night and the sight of her ex-husband and his new punk princess really shook up Lambert. It has only been four months since the country couple called it quits. Now Miranda is realizing just how fast Blake moved on to Gwen and it’s got the “Heart Like Mine” singer in a rage because she’s realizing now that Shelton and Stefani had to have been making passes at each other before Blake decided to call it quits.

Of course Miranda has been blamed for the breakdown of her marriage to Blake, it was Shelton who ultimately called it quits and filed for divorce. Miranda is really believing that Shelton only ended their marriage because he had already fallen for Gwen.

Of course Gwen Stefani didn’t mean to steal Miranda’s man but that’s just how it works sometimes. When Stefani’s marriage to Bush rocker Gavin Rossdale was falling apart, Blake Shelton was there for Gwen and as the No Doubt singer moved on from her own marriage, she started to really crush on Blake according to Miranda’s cheating theory. Since Blake was miserable with the way Lambert had been treating him, the country singing “The Voice” coach started to really dig his co-star back.

Now that Miranda Lambert has put the pieces together and realized that Gwen is partially responsible for breaking up her marriage, Miranda is seething mad and is starting to think that Gwen is just being rude now that she already took Lambert’s man and now Stefani won’t stop rubbing it in everywhere Miranda Lambert looks.