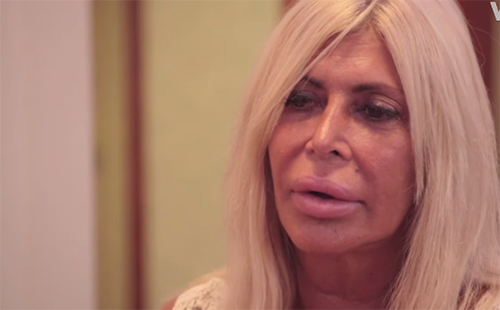 “Mob Wives” is back, and it looks like there will be PLENTY of drama and action this season. The season will kick off on January 13 on VH1; however, the real drama happens on social media between the cast.
Last season, Natalie ‘Ratalie’ Guercio caused plenty of drama with her constant cyber-attacks on social media. Renee Graziano and Karen Gravano were sick of her games and weren’t entirely convinced she was connected to the mob. Even so, she proved that she wasn’t scared to go toe-to-toe with some of the scariest mobster women in the business and never backed down from a squabble with them. Sadly, VH1 didn’t extend her an offer to return for the season six; Natalie won’t appear in the season, at all.

The promo opens with Drita D’Avanzo talking to her husband, Lee, on the phone. She tells him that she is writing a tell-all book about her life. He didn’t sound pleased on the phone, knowing that much of her book will entail details from his gangster past – and may include things he doesn’t particularly want to be aired before the public. Drita lets him on a secret – she doesn’t care if he doesn’t like it; she is publishing her book.

Drita and Carla used to be best friends and spotted by the media constantly. Ever since the new season started filming, Drita hasn’t been seen with Carla at all. In fact, fans wonder if something happened while filming that damaged their friendship. Carla has been seen with Renee, Karen, and Big Ang fairly regularly. Drita seems to be fostering new friendship, taking up allies with new cast members Linda Scarpa Brittany Fogarty, and Andrea Giovanni.

Big Ang will face one of the hardest times in her life, this season when she learns that she has cancer. She will need the love a support from her friends and family. The promo showed the doctor giving her prognosis, and she looked terrified. The real question is . . . will her family be there for her?

“Mob Wives” returns on Jan. 13, 2016; VH1 promises this season will show more drama and conflict than ever before. Are you glad that Carla is back to cause more trouble? Don’t forget to come back for juicier “Mob Wives” spoilers, gossip, and news!