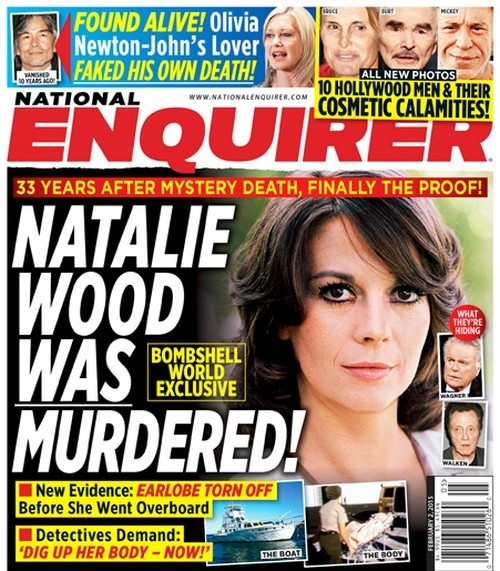 Natalie Wood’s death continues to be a topic of controversy and fascination, decades after it actually happened. It seems like every other week we get new information about her death suggesting that it was a murder, only for the investigation to back track and stall for another couple of months.

However, the latest cover issue from the National Enquirer claims that Natalie Wood WAS murdered and new evidence strongly supports that theory. The same theory also suggests that Natalie’s husband and the #1 prime suspect, Robert Wagner, might have ripped off Natalie’s ear in a violent struggle before her death.

A forensic consultant spoke to the Enquirer about confirming this possibility, explaining, “Having her body exhumed for a second autopsy can determine if anything was possibly missed.”

The case was reopened in 2011 and the cause of death changed from ‘accidental drowning‘ to ‘drowning and other undetermined factors’. It seems like the public’s and media’s fascination with the case is keeping the interest alive from investigators, and more and more, it’s starting to look like there was foul play involved. Everybody intimately involved with the case – especially from Natalie Wood’s side – claims that Robert Wagner absolutely killed Natalie, and then used the water and his connections to cover it up. And now, it’s unfortunately too late to be able to use most of the evidence against him, which has necessitated in all these hypothesis – most of which go unproven.

The Enquirer’s cover issue also has a long feature on famous Hollywood men and their horrid plastic surgery, and to no one’s surprise, Bruce Jenner, Mickey Rourke, and Burt Reynolds are featured at the top of that list. Bruce Jenner looks like a waxy version of himself, Burt Reynolds looks like he’s the crypt keeper’s cousin, and Mickey Rourke? Well, let’s just say that if you told me Mickey Rourke awakened from the dead yesterday, I would believe you.