BY Kristine Francis on May 12, 2015 | Comments: one comment
Related : NCIS, Recap, Television, TV 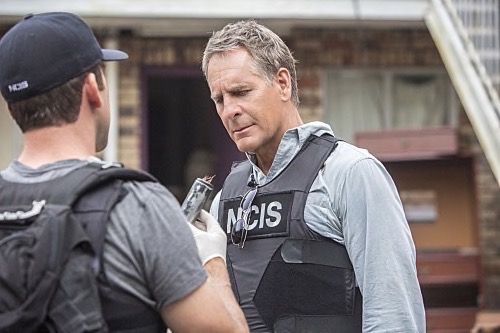 Tonight on CBS NCIS: New Orleans returns with an all new Tuesday May 12, season 1 finale called, “My City,” and we have your weekly recap below. On tonight’s episode, season 1 ends with the search for a mole among the ranks as NCIS and local law enforcement track the Broussard Syndicate after new intelligence suggests a breach at the ports.

On the last episode to send a message to Pride, Baitfish murdered someone close to the NCIS team, prompting a citywide manhunt for the elusive criminal. Dylan Walsh guest starred as Captain Jim Messier of the Jefferson Parish Police Department. Did you watch the last episode? If you missed it, we have a full and detailed recap right here for you.

On tonight’s episode as per the CBS synopsis, “after receiving intelligence that the ports have been breached, placing the Navy and the Gulf Coast in harm’s way, Pride and the NCIS team follow every angle to determine what has entered their city and how they can put a stop to the Broussard Syndicate, who seem to always be one step ahead of them. Dylan Walsh guest stars as Captain Jim Messier of the Jefferson Parish Police Department, Steven Weber returns as Councilman Douglas Hamilton and Stacy Keach returns as Cassius Pride.”

Tonight’s episode looks like it is going to be great and you won’t want to miss it, so be sure to tune in for our live coverage of CBS’s NCIS: New Orleans at 10:00 PM EST! While you wait for our recap hit the comments and let us know how excited you are about the season 1 finale.

Bayfish’s warning appears to be coming true on tonight’s all new episode of NCIS: New Orleans when a young naval officer came upon something at the docks and was killed because of it.

Naval Officer David Hanson was found dead at one of the loading ports and as the local NCIS unit it was up to Pride and his people to work the case. However they noticed something off at the first chance they got. There was a ton of containers lying around and only one was open. So the guys took a look inside and an actual search revealed that someone had been living in that particular container.

So that storm they warned about, what if it wasn’t a “what” but a “who”? Bayfish had said that the Broussard Syndicate was onto something big. And that guns, ammo, and even the antiques that the NCIS was confiscated was bound to be child’s play.

Yet Bayfish never got a chance to say more because someone had silenced once and for all. And so not only is there an imminent threat to the city but Pride has to worry about a spy as well.

He had the offices sweeped for any bugs and then he did the one thing he didn’t want to. He approached a known criminal in jail for help. Because like the saying goes “the enemy of my enemy is my friend”. And Pride is going to need friends if he has to go up against Councilman Douglas Hamilton.

Pride suspects Hamilton of being the mole and the one person he turned to in his hour of need just happened to be his father Cassius Pride.

Cassius stole a lot of money and he hurt a lot of people but once upon a time he used to have his own kind of people in all traces of the New Orleans’ government. Yet when his son approached him, Cassius claimed he couldn’t be of any help. In fact he said he had given up all of that long ago. And now merely wants to focus on his prison garden.

Elsewhere, though, Sebastian did get some answers when he ran a DNA test on whoever had been living in the container. And while the results didn’t yield a name, it did show that the person was of South American descent.

And what do you know a group of Southern American women had been reported in the nearby area! Sadly for the women, they had been trafficked and initially it had looked like they were going to be rescued when Hanson found them. But then someone else showed up and killed Hanson right in front of them.

So the girls didn’t bother trying to make a run for it. They just silently went along with the man they knew would kill them if they resisted.

And although they couldn’t identify who took them or killed Hanson, the DNA that was found on them in addition to a tattoo that one of them saw helped the team realize who they were chasing. A South African terrorist group. That also has an agenda which includes destroying towns like theirs was when the Americans had finished depleting them of their natural resources.

Thus the conclusion was what if they were actually working two cases at once that just so happens to be connected. Yet before anything could be done about that theory, Pat had found out something. He learned that the Port Commissioner had erased the tapes of the night Hanson was murdered. And that this commissioner had been hired by Hamilton.

Hence a closer look at Hamilton was needed and a list of his “donors” (with the help of Cassius) pinpointed who was the inside man. And sadly it was friend of Pride’s.

The team couldn’t go after Hamilton but they could for a corrupt officer. Yet that man claimed he didn’t do anything out of greed. He did it because of Sasha. Sasha had allegedly seduced him and he also claimed that he had no idea what or who he was letting into the ports. But whoever had planned on killing him (and failed thanks to Pride) left a piece of evidence behind.

The terrorist had plans to move on a Naval Base and they put all on file. So the NCIS found out what was happened tried to get there in time. However, by the time they did, it was far too late. A canon had gone missing before anyone had noticed.

So here’s what happened: Hamilton gave free reign to the criminals and the criminals ran the town based solely on profit. Thus, ultimately, terrorist found their way in for the right price. And the group that hailed from South Africa were attempting to hit a nuclear power plant using military grade weapons.

But they never even got a chance to launch it because Pride and LaSalle arrived with guns blazing and they had Percy on the other line directing them.
Percy helped Pride diffuse the launcher and because of that Pride was willing to overlook how she tried to push herself onto the team instead of simply asking. So in the end she got what she wanted and that was a place to belong.

Percy is now part of the team and Pride didn’t just stop being generous with her. Apparently he wrote to the parole board about his father. And he said Cassius is a changed man.

So now early release shouldn’t be too far off.