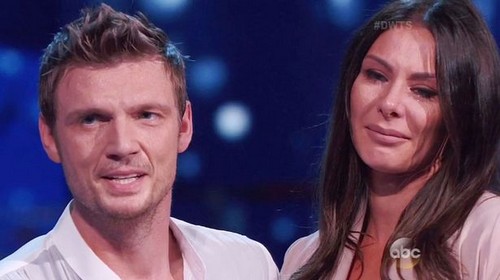 Dancing With The Stars contestant Nick Carter is going to be a dad and learned the sex of baby on DWTS live! News broke last month that Nick’s wife Lauren Kitt was pregnant with baby number one, however the Backstreet Boy did not confirm nor deny the baby rumors.

As predicted, Nick Carter and Lauren made their big baby announcement during last night’s live episode of Dancing With The Stars. Because, why waste a perfectly good baby announcement and not use it to help score some more of America’s votes?

For Week 8 of Dancing With The Stars, Nick Carter and his pro partner Shanna Burgess took the stage and performed a contemporary piece – which Nick had dedicated to his pregnant wife. After their performance, Nick and Shanna received a perfect score from the DWTS judges. Then, Nick and Lauren joined Erin Andrews for their post performance interview.

Nick Carter and Lauren Kitt confirmed that they were pregnant with their first child together. And, they had decided to wait until they were on live television to learn the sex of their unborn baby. Erin Andrews presented Nick and Lauren with a box, with a huge bow holding it closed.

Nick and Lauren opened the box – and a bunch of blue balloons floated out. The Backstreet Boy and his wife were in tears over the exciting news that they were having a baby boy, and if the emotional scene didn’t score Nick some more of America’s votes, then we’re not sure what possibly could.

Ironically, the same week that Nick Carter and Lauren announced their baby news, pregnant dancer Alison Holker and her partner Andy Grammer were eliminated. So DWTS fans, are you as happy for Nick and Lauren as we are? Do you think that the baby gender reveal on live television could give Nick an edge over some of the other teams? Share your thoughts in the comments below!