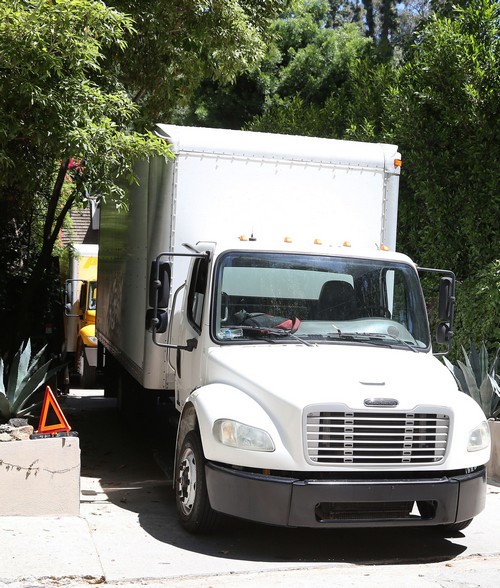 Nicole Richie and Joel Madden have been facing intense rumors of divorce and sources are saying it is all true. Moving trucks pulled up today at their home in LA and it looks like someone is moving out and couple have split. The 33-year-old Nicole Richie was recently spotted meeting with her husband Joel Madden at a pizzeria in Los Angeles on Tuesday, May 5, however Richie and Madden looked far from happy. A source recently told InTouch that the couple are “on the brink of divorce,” so perhaps the two were meeting to discuss the terms of their break up.

The source goes onto say that Richie and Madden have been “spending more time a part because all they do is fight when they’re together. The last thing she wants is a public split with the children involved, but she’s desperately unhappy.”

In Touch Weekly has gone as far as reporting that Nicole Richie has taken the final step towards ending her marriage with Joel Madden. After four years, a source tells In Touch, “Nicole recently met with one of LA’s most prominent divorce attorneys and is weighing her options.”

The source ends by saying, “it’s better for everyone right now if they just stay apart because it’s really not working anymore. It’s very obvious to friends that a divorce announcement will probably be happening soon.”

Now, photos have recently surfaced of two large moving trucks in front of the Richie/Madden residence, and rumors are flying even more. On May 8, 2015, in Los Angeles California, two trucks were spotted infant of their home, signifying that the end may be closer than we think.

There is way too much evidence pointing at a divorce for them to deny at this point. We would not be surprised if we hear an announcement from either, or both sides, in the coming days or weeks. In the mean time, we will be keeping you updated as soon as find out more information. What do you think? Are these trucks the beginning of the end? Let us know in the comments below.

Two large moving trucks were spotted outside the home of Nicole Richie and Joel Madden on May 8, 2015 in Los Angeles, California. Divorce rumors have been swirling around the couple for some time now and these two big trucks may be a sign that the end is near… FAME FLYNET