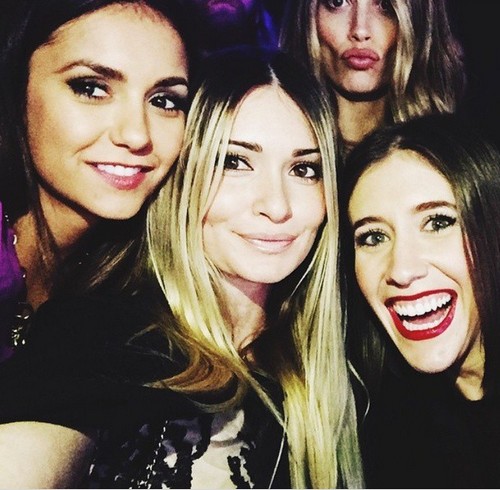 Nina Dobrev won’t be invited to Ian Somerhalder and Nikki Reed’s wedding since The Vampire Diaries love triangle terrifies Nikki. Nina Dobrev, Nikki Reed, and Ian Somerhalder are playing a dangerous game of Russian roulette with their emotions – and more importantly, their relationships. Rumor has it that after Nikki and Ian got officially engaged, Nina started getting closer to Ian on the set of The Vampire Diaries. In fact, Nina and Ian have been getting so close that Nikki has reportedly been getting worried, almost to the extent that the wedding started being questioned.

But alas, either Nikki has a terrific PR team or Ian and Nikki really are planning to get married – despite what Ian feels about it or doesn’t feel about it. A source tells Hollywood Life that Ian and Nikki are now debating whether to invite Nina Dobrev to the wedding, with Hollywood Life’s source explaining, “It’s a very weird predicament for Ian and Nikki. If it is a big wedding Ian feels that he has to ask Nina to go, but anticipates her to respectfully decline. That would be a win win.”

And knowing the situation, Nina will probably agree to go, even if it’s out of spite. After all, she and Ian broke up two years ago, so even inviting her to the wedding would be tantamount to rubbing her face in the situation. I mean, Nikki Reed and Ian Somerhalder started dating just a few months ago, and Ian Somerhalder and Nina Dobrev dated for significantly longer without getting engaged – no matter what Ian does, his recently engagement is going to rub Nina the wrong way, even if they have been getting ‘closer’ over the past few months.

At the end of the day, inviting Nina Dobrev to the wedding is probably a risky move, but Ian will probably deal with the repercussions of that on his own, no? I doubt he and Nina will have their star-crossed lovers-type reunion at the wedding, despite what their shippers are rooting for. Plus, Nina seems too sensible to agree to attend such a wedding, even if she does get invited.

What do you guys think about Nikki Reed and Ian Somerhalder getting married in a fancy wedding ceremony, with or without Nina Dobrev? Let us know your thoughts in the comments below.