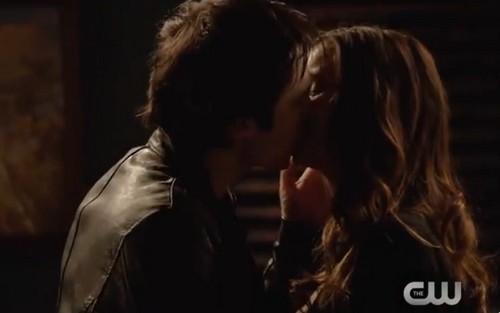 Forcing Nina Dobrev to be filmed kissing Ian Somerhalder for The Vampire Diaries is a slap in the face to the young star and it would be no surprise if Nina quit the series as soon as her contract allowed. The glorified relationship on The Vampire Diaries between Damon Salvatore and Elena Gilbert has carried the franchise much farther than anyone ever anticipated, and of course the fact that the characters’ portrayers Nina Dobrev and Ian Somerhalder were dating in real life only helped the make believe couple rise to infamy. When Nina and Ian broke up in 2014, and it became clear it was the real deal and Ian moved on with Nina’s old pal Nikki Reed – The Vampire Diaries showrunners began panicking and managed to put together an entire season keeping Elena and Damon as far away from each other as possible.

But, The Vampire Diaries fans have spoken and they want Elena and Damon back together – regardless of the fact that Nina and Ian can’t stand to even be on the same set with each other at the same time. The Vampire Diaries has released an all new promo for Season 6 Episode 11 which features Nina and Ian’s characters Damon and Elena in a hot and steamy kiss. Well, we’re sure in the script the actors were directed to make it hot and steamy – but no amount of retakes and editing can hide the discomfort on Nina Dobrev’s face. Would you be able to make out with you ex-boyfriend after he dumped you and flaunted his relationship with your friend all of the West Coast? Talk about humiliating…

At the end of the day, neither Nina Dobrev nor Ian Somerhalder could just walk away from a TV show that catapulted their careers the way the CW hit did, and it almost seems that the two stars are in a stand-off and believes the other person should be the one that disappoints millions and fans and quits The Vampire Diaries. The network has already promised Nina and Ian that if they set aside their differences and pull themselves together for a final season of Damon and Elena sex scenes – that they will finally end the show. Now, it’s just a matter of whether Nina and Ian will be able to finish up The Vampire Diaries and making out with their ex everyday – or if one or both of them will finally snap on set and quit.

What do you think of Nina and Ian’s make-out session in The Vampire Diaries Season 6 Episode 11 spoiler video? Is the obvious lack of chemistry as obvious to you as it is to us? Do you think Nina and Ian will finish the show up – or quit and disappoint their fans? Let us know what you think in the comments below!