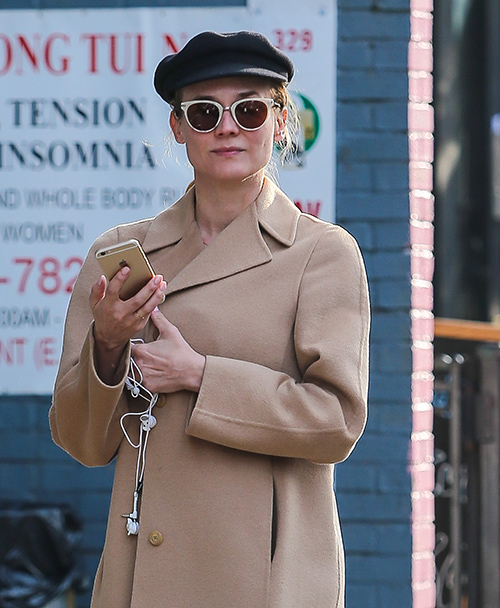 The Walking Dead’s Norman Reedus and Diane Kruger are totally hooking up, and possibly dating, despite their reps attempts to cover up their cheating scandal. Norman and Diane hookup rumors began with a report CDL shared yesterday. Several witnesses saw Reedus and Kruger walk into a dive bar in the East Village last Friday.

There, they reportedly ordered some drinks – a vodka for Diane and a whiskey for Norman – and were talking before they suddenly started making out like teenagers. Kruger was said to have got up from her chair and then straddled Reedus while several witnesses watched in dismay. “They were making out on top of each other, holding hands,” one witness told NYDN.

Diane Kruger has been dating Joshua Jackson since 2006, and there has been no reports of their breakup. Joshua is currently half-way around the world in Manila, so the Norman Reedus and Diane Kruger make out report seems completely fabricated and both actors’ reps are trying to convince the public that this whole thing is nothing more than a juicy piece of gossip.

However, a follow-up report on Kruger and Reedus’ hookup confirms the duo was, in fact, at the dive bar together. Oddly enough, Kruger, Jackson, and Reedus all starred in ‘Sky’ together, and a source confirmed to another media outlet that Diane and Norman were in the bar and joined by ‘Sky’ director Fabienne Berthaud.

ET added another denial from reps along with a source that insists the former costars were not making out, but added that this isn’t the first incident of Norman Reedus and Diane Kruger being more than friends. The source claims Kruger sat on Norman’s lap during the ‘Sky’ premiere after party at the Toronto International Film Festival. “They were close all night and talking about relationship stuff,” the source explained. “She was talking about how he wasn’t ready to settle down…They seemed like they were more than just friends.”

It’s pretty clear Norman Reedus and Diane Kruger are hooking up and possibly dating, despite all the reps attempting to cover the cheating scandal element. Maybe Diane and Joshua Jackson are in some kind of open relationship? What do you think? Let us know your thoughts in the comment section below and stay tuned to CDL for more updates on Norma Reedus and Diane Kruger’s possible relationship.