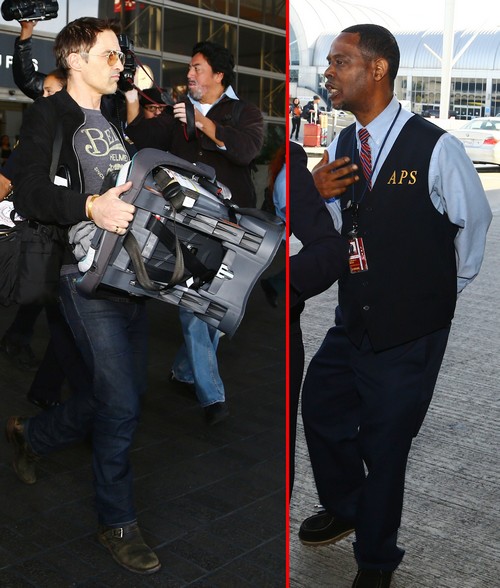 Olivier Martinez really, really needs to learn the meaning of self-control, because at this rate, he’s going to end up in prison. Olivier Martinez has once again been accused of beating up a paparazzo/airport employee at LAX airport after they got too close to Halle Berry and their daughter, Nahla.

According to TMZ, Olivier Martinez, Halle Berry, and Nahla all arrived at the LAX International Terminal on Sunday afternoon, but the paparazzi got too close to the family as they were leaving the airport. However, in addition to all the paparazzi, there was also an airport employee among the melee, apparently trying to take a picture. In the confusion, Olivier pushed the empty car seat he was holding against the employee, who then fell backwards. The employee had to be taken to the hospital and has complained of stomach pain, and he’s filed a battery report against Olivier.

TMZ’s video shows that the employee wasn’t lying, and he did indeed fall backwards after being pushed by Olivier Martinez. Now, a lot of people are being quick to dismiss the employee’s claim of stomach pain as a way of getting money, which it very well could be. However, Olivier is a boxer and a violent brute – recall what he did to Gabriel Aubry, and it’s clear that he used a lot of force when pushing people out of the way. Plus, if you combine that with the fact that the car seat itself was also big and heavy, it’s not impossible to assume that it would have caused the employee significant harm.

Even disregarding that part, you’d think that Olivier would learn his lesson when it comes to getting into fights at the airport, right? He’s done it before, and it’s never worked out well for him. Plus, it always, always drags Halle Berry into the limelight, which in turn affects their daughter, Nahla. For all the complaining Halle does about wanting to leave the US, I don’t think it’ll make a difference if Olivier goes with them.

What do you guys think about Olivier becoming a battery suspect? Do you think that he was well within his rights to push the employee, or was he crossing the line? Let us know your thoughts in the comments below.

Halle Berry arriving on a flight at LAX airport in Los Angeles, California with her husband Olivier Martinez and her two children Nahla & Maceo on January 4, 2015. Halle and her happy family are returning to the states after spending the holidays in France. Upon arriving Olivier thought photographers were getting too close to his family and used an empty car seat to push a photographer down. It wasn’t an actual photographer but an airport employee who was treated at the scene and pressed battery charges against Olivier. The employee complained of abdominal pains in the battery report.