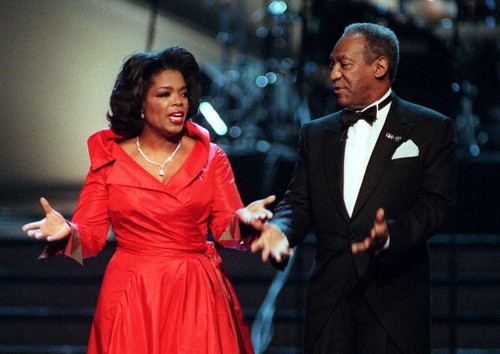 Oprah Winfrey wants to interview Bill Cosby and discuss the rape allegations that plague the comedian. Media is still buzzing over the shocking Bill Cosby rape allegations that have swept the nation, women have been coming out of the woodwork accusing the family man and comedian of drugging them and raping them over the years. Despite Bill Cosby’s wife Camille’s controversial quotes on the matter and firm denial that such events ever happened, Bill Cosby has still not properly addressed the allegations – which is only causing them to further spiral out of control and appear more and more true to fans who have been following the media coverage.

According to a new report from Star Magazine, Bill Cosby might finally sit down and discuss the rape allegations in a no-holds bar interview with none other than Oprah Winfrey. The magazine reveals, “Oprah has already sat down and had some talks with Bill and his wife Camille. He respects Oprah and she knows it would be an absolute ratings bonanza for her OWN network. Oprah has been to the Cosby house several times, she was one of the people that reached out to them when their son Ennis was murdered. They have mutual friends and he thinks she won’t hit him with too many hardball questions.”

Sometimes when scandalous accusations and rumors emerge celebrities’ best bet is to ignore them and let them run their course and not add fuel to the fire. However, the rape allegations don’t seem to be going away and if Bill Cosby doesn’t speak on them soon it could be career suicide. He has already lost some major business opportunities including a deal with Netflix and a television show he was working on with NBC. Major news networks have been nipping at Cosby’s heels for an exclusive interview on the rape allegations – if he does decide to finally speak out on the allegations, his best bet would be to do so with Oprah in a friendly situation where he is given a decent chance to either explain or defend himself.

If Oprah lands an exclusive interview with Bill Cosby, will you tune in? Do you think the comedian will deny the rape allegations or make a shocking confession? Let us know what you think in the comment section below!