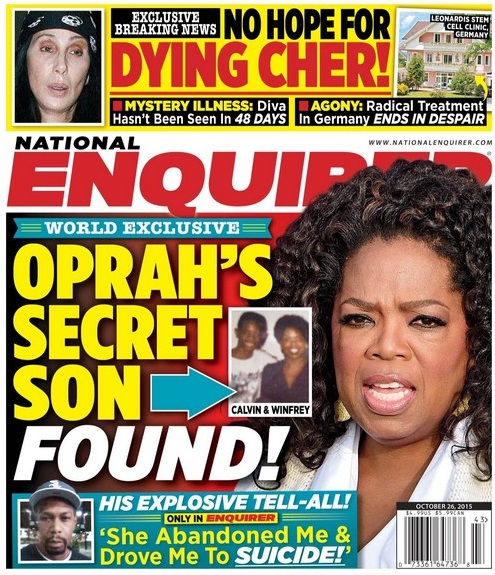 Talk show queen Oprah Winfrey is 61 years old – and has no children, or so she wants everyone to believe. According to a bombshell new report from National Enquirer, Oprah actually has a secret son that she turned her back on many years ago. Calvin Mitchell, a former child actor was taken in by Oprah Winfrey and according to Mitchell she was going to adopt him – until she allegedly dropped him like a bad habit and turned her back on him, completely abandoning him.

Calvin Mitchell sat down with National Enquirer and dished all the details of what went down with his alleged ‘almost mother’ Oprah Winfrey. Calvin revealed that he met Oprah when he was just 12 years old, he was working on the ABC Studios set.

Oprah took Calvin under her wing, and forged a mother-son bond with him. According to Mitchell, Oprah looked out for him, helped him with his homework, and even took him to her personal ranch for weekend getaways. But, Stedman Graham refused to let Calvin move in with them in their mansion.

According to Mitchell’s story, since Stedman wouldn’t let Calvin live with them – Oprah paid for him to go away to a Mississippi boarding school for boys. But, during his junior year he got homesick and wanted to return to Chicago.

Calvin explained, “She was trying to inspire me to do what was right, but even after the long pep talk I still left. By leaving school I had failed my whole family, and let everyone down. But, I thought Oprah and Stedman would still be a part of my life. I was young and I made a dumb decision. But, I feel like what she did was wrong.”

After Calvin dropped out and returned to Chicago – Oprah refused to see him, and even had her minions send him home when he popped up at Harpo Studios and tried to visit the talk show queen.

According to Calvin, being shunned by Oprah devastated him – and sent him in to a downward spiral.
Calvin’s story is touching and all … but is Oprah really to blame? What do you guys think? Does Oprah really owe Calvin Mitchell anything? Share your thoughts in the comments below!