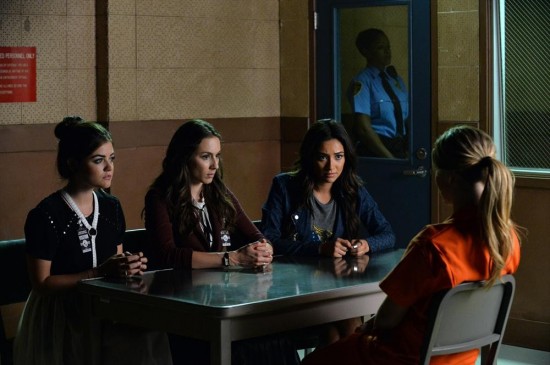 Pretty Little Liars returns to ABC Family tonight with an all new Tuesday February 24, season 5 episode 21 called “Bloody Hell,” and we have your recap below. On tonight’s episode, the girls talk to Alison [Sasha Pieterse] and try to get her out of jail after uncovering Mike’s connection to Mona. [Janel Parrish]

On the last episode, Hanna hired a coach to help with her beauty-pageant goals, and she also turned to Emily for guidance. Meanwhile, Aria worried if Mike was linked to Mona’s death, so she asked Andrew to keep an eye on him; and Spencer assisted Jonny with an illegal activity. Did you watch last week’s episode? If you missed it, we have a full and detailed recap right here for you.

On tonight’s episode as per the ABC Family synopsis, “The girls talk to Alison and try to get her out of jail after uncovering Mike’s connection to Mona. Meanwhile, Spencer travels to London for a college interview; and Alison turns to someone unexpected for assistance with her murder trial.”

The twenty first episode of season five’s PRETTY LITTLE LIARS is going to be really exciting and we’ll be recapping it for you right here. While you wait for the recap, check out a sneak peek of tonight’s episode below!

Tonight’s episode of Pretty Little Liars kicks off with Emily at work at the Brew, she corners Talia in the kitchen to discuss getting her hours covered. Talia gives her the cold shoulder and announced that she has quit her job and it is her last day – apparently she doesn’t want to work with Emily since she broke up. Meanwhile, Aria is at Spencer’s house talking to her mom and getting legal advice. She asks Spencer’s mom about Mike’s options – if he goes to the police now with information on “A” and Mona’s death, then he could face charges for interfering with a police investigation. Aria keeps the conversation anonymous and doesn’t tell Spencer’s mom that she is talking about her brother.

Aria heads upstairs to talk to Spencer, Emily and Hanna join them. Hanna thinks that they should come clean to Spencer’s mom and ask her for help – Aria says that is not an option because her brother will end up in prison for interfering with the case.

Spencer’s mom heads to the prison to visit Alison DILaurentis, Mrs. Hastings demands to know why Spencer and her friends have been visiting Alison in prison. Alison says that the liars have been visiting her because they realize that she is telling the truth. Alison cries that she wants to take the stand in court and tell her side of the story – Spencer’s mom reassures her that her lawyers are right and the last thing that she should do is take the stand. Alison snaps that she wants to tell her side because for once it is the truth. Alison asks Spencer’s mom to help her and coach her on what to stay on the stand.

Aria returns home and Andrew is waiting for her, apparently they had a study session and Aria totally forgot about it. Aria tells him that she is really busy with other stuff and they need to cancel their study sessions for a while. Andrew agrees and asks her out on a date to the movies tomorrow, Aria rambles that she is still seeing Ezra – Andrew explains that they can go as “just friends.”

Spencer arrives in London to visit her sister Melissa, she arrives at her apartment and meets Colin, Melissa’s roommate. Colin says that Melissa is out of town and won’t be back tomorrow, he tries to make small talk about what college Spencer has come to London to interview for but Spencer ignores him and fidgets with her phone. Back at prison Alison returns to the laundry room after her meeting with Mrs. Hastings and someone left a message for her on the table, “Mona Told Everything.”

The next day at work Emily runs in to Talia, she came to pick up her last check. Talia has a suitcase with her, she admits that she told her husband Eric the truth about her sexuality and she and her husband are broken up. Talia isn’t worried though, she is moving in to a hotel and has booked a catering gig there. Emily feels guilty, she invites Talia to stay at her house because her mom is out of town.

At Hanna’s house her mom Ashely is stressing over her resumes and finding a new job. Aria arrives in a frenzy – she found Cyrus. She wants to visit Cyrus, he admitted that “A” paid him to set Alison up. Cyrus got hurt at work and is in the hospital, Aria wants to visit him and get information on “A” from him. He is their only link to “A,” and right now he is in the hospital and can’t get away from them.

Aria and Hanna arrive at the hospital and are surprised to learn that Cyrus is in the burn unit, they though that he had broken an arm or a leg. Meanwhile in prison Alison hears a noise under her bed, it’s a tin can. She opens the can and finds a tiny doll that looks just like her with a note, “You’re already over a barrel, want to be in one too?” In London Spencer is at her college interview and killing it, until the professor notices that her bag is leaking what looks like blood all over the floor. Spencer digs through her bag looking for what is leaking and then races out of the room and says that she needs to wash her hands.

Emily is at the studio rehearsing her dance for the pageant – she is still planning on completing and winning the prize for Hanna. Talia arrives and catches her routine, she jokes that she didn’t think that Emily was the beauty pageant type. Emily invites Talia to dance with her.

At the hospital, Aria and Hanna go in to Cyrus’s room – he is wrapped in bandages from head to toe and can barely talk. He mumbles that what happened to him was not an accident. He takes a pen and writes on a piece of paper, “Carjack.” Then the nurse kicks them out. Spencer calls Aria’s cell phone and is having a panic attack, she cries that “there was blood everywhere and she wants to come home.” Aria reveals to Spencer that they just visited Cyrus and it looks like “A” put him in the hospital and made it look like a carjacking. Spencer hangs up and receives a text message from “A”, ‘Keep calm but watch your carry-on, there is plenty more blood where that came from.’ At the dance studio Emily and Talia are having a good time until Talia slips and falls and begins sobbing. Emily helps her up and they slow dance and hug each other.

In the elevator Hanna looks at the note that Cyrus gave them and they realize that they read it all wrong, he didn’t write “carjack” he wrote “Varjack,” like the character in Breakfast at Tiffany’s. They remember that Alison used to allude to the book and “A” must have been going by the name of “Varjack” when he/she contacted Cyrus. Back in Cyrus’s hospital room someone sneaks in wrapped in bandages so that we can’t see their face…

At the studio a woman interrupts Emily and Talia’s dance session and says that Emily is not eligible to compete because she is not of “good moral standing.” Emily freaks out because she thinks that she is being kicked out because she is gay. But, the woman reveals it has nothing to do with who she is dating – it’s because she is so close to the Alison DiLaurentis murder trial.

Aria heads home to find her brother, she goes in his room to find his schedule and it is hanging high on the wall. Aria steps on the weight bench that “A” loosened the bolts on last week to get his schedule off the wall, and it collapses underneath her. Andrew overhears her falling and rushes upstairs to check on her. He looks at the weight bench and picks up the bolts off the floor. He tells Aria that if Mike had laid on the bench press to work out the weights would have fallen and crushed his skull. Andrew bandages up Aria’s ankle and comforts her, they kiss.

Spencer’s mom is at home sorting through Alison’s case files for her murder investigation. She realizes something and calls Spencer frantically – she leaves her a voicemail and tells Spencer to cancel her flight home and stay in Rosewood. Hanna visits Alison in prison, Alison admits that she used to love telling Hanna and the girls what to do every day – and in prison no one listens to her, she doesn’t even get to decide what time she takes a shower. Alison breaks down in tears because she realizes how Hanna must have felt when she bossed her around for their entire friendship. She asks Hanna if they can start over, Hanna says they can try – but only if Alison is honest with them about everything. Hanna demands to know who Varjack is…

Tonight’s episode ends with “A” dressed in all black and filling the bibles at Alison’s prison with $20 bills.