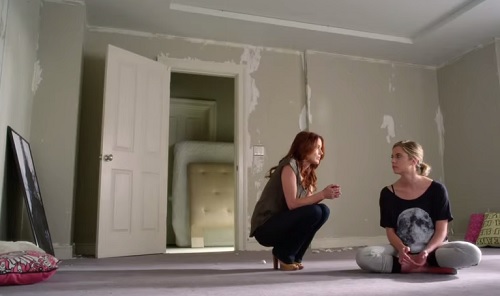 Pretty Little Liars season 6 spoilers tease that Episode 2, “Songs of Innocence,” will air on ABC Family on Tuesday, June 8. PLL fans are still reeling from the crazy revelations made in the Season 6 premiere. Hanna, Emily, Spencer, and Aria may have made it out of Charles’s creepy doll house – but according to Season 6 spoilers, the drama is just beginning. The obvious question on everyone’s mind is: who is Charles DiLaurentis? Is he Alison’s brother, did Jason have a twin?

Pretty Little Liars spoilers for Episode 2 reveal that the liars are safe – for now – and are taken to the hospital to recuperate after their horrific ordeal at Charles’s house of horrors. But, judging from the promo video for “Song of Innocence,” their kidnapping could have done some irreparable damage to the unbreakable liars. In the all new spoiler video from ABC Family, Hanna, Spencer, Emily, and Aria appear to be lying in hospital beds. A troubled Hanna Marin asks, “What if this is all some sort of hallucination, like we never really got out?”

While Hanna is trying to catch her bearings, the Season 6 Episode 2 spoiler video indicates that Emily Fields has taken a different approach to healing. PLL spoilers tease that in “Songs Of Innocence” Emily will take up shooting and heads to the fun range to learn how to protect herself. While the liars are coping with the traumatic ordeal, Alison DiLaurentis is a woman on a mission. Pretty Little Liars spoilers tease that she begins searching for answers and demands that her father tells her who Charles DiLaurentis is.

“The girls may have gotten out of the Dollhouse but what happened to them during their time of captivity has lasting effects. With worried loved ones watching over them, the PLLs are home and trying to heal, with not much success.”

So PLL fans, what did you think of the Season 6 premiere? Who do you think Charles DiLaurentis is? Did Jason have a twin brother? Is Andrew Campbell actually related to Alison? Does that mean that Spencer Hastings hooked up with her half-brother? Let us know what you think in the comments below, and don’t forget to check CDL for all of your Pretty Little Liars spoilers and recaps!