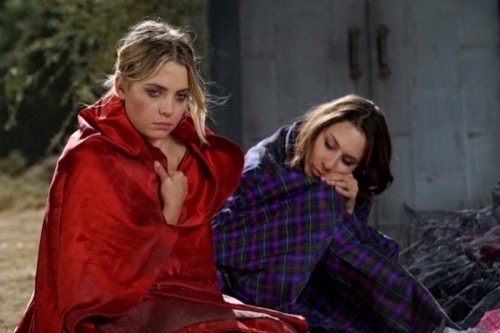 Pretty Little Liars returns to ABC Family tonight with an all new Tuesday June 2, season 6 premiere called “Game On, Charles,” and we have your recap and spoilers below. On tonight’s episode, in the sixth-season opener, the girls are trapped outside of Charles’ Dollhouse, and his games grow more sinister. Meanwhile, Ezra, [Ian Harding] Caleb [Tyler Blackburn] and Toby [Keegan Allen] are determined to locate the girls.

On the last season episode, in the season five finale, “A” has always had fun playing with Aria, Emily, Hanna and Spencer, but now “they” have the biggest game to date in store for the girls. As shocking secrets come to light and the biggest clue to the “A” mystery is revealed, is this one playdate the Liars can survive? Did you watch the last episode? If you missed it, we have a full and detailed recap right here for you.

On tonight’s episode as per the ABC Family synopsis, “Moments after where the season five finale left off, Aria, Emily, Hanna, Spencer and Mona are trapped outside of Charles’ Dollhouse with nowhere to go and must now deal with an angry tormentor. Just when the Liars thought Charles couldn’t get any worse, his games take a more demented and darker turn. As the girls struggle to survive, the puzzle of Charles’ story begins to come together.”

Season six of PRETTY LITTLE LIARS is going to be really exciting and we’ll be recapping it for you right here.

Tonight’s episode of Pretty Little Liars kicks off with the liars trying to escape from the house of horror where “A” is keeping them hostage. They pass by a room and don’t even notice a girl with long blond hair, and a yellow shirt that looks like Alison – she is writing on the wall with chalk. It looks like she has been held hostage for months.

Mona, Spencer, Aria, Emily, and Hanna make it out of the house and realize that they are still trapped – there is an electric fence surrounding the house and they appear to be in the middle of nowhere. Spencer tells the other girls that she saw Charles in the house, and was close enough to touch him. She thinks that they know him, he seems familiar but he was wearing a mask. The girls have no choice but to sleep outside, Charles locks them out – they cuddle together in their prom dresses in the pouring rain and thunder. They survive the night, and then Charles leaves them out there all day – they are going on 48 hours without food or water. Hanna whines that she is “so thirsty she could drink her own pee.”

After a few days Charles opens the door to the house, a voice over the loudspeaker tells them to enter the house and “follow the lighted pathway.” They are scared to return to the house, Mona thinks they will be okay, she says Charles might not be mad at them anymore. The girls agree to follow the voice’s orders and head back inside the house of horrors. They tip top down the hallway, and then someone turns the lights off and throws a smoke bomb at them. While they are struggling to see and breathe, Charles emerges with a gas mask on and he drags Mona away.

Aria, Hanna, Emily, and Spencer wake up in a room, they’re naked and covered in sheets – they appear to be in some sort of morgue. Spencer realizes that “A” probably made them look dead and took pictures of them so that he could send pictures to their family and they will stop looking for them. A voice comes over the loudspeaker and tells the girls to “go to their rooms and find their surprises.” Mona emerges dressed in a candystriper uniform, she tells the girls to go their rooms or else “A” will come in the night and steal them and “take them to the hole.” The liars have no choice but to return to their rooms to see what their surprises are.

Fast forward three weeks later – a reporter is standing outside of Alison DiLaurentis house. She reveals that Andrew Campbell is the top suspect and is on the run – he is presumed to be dangerous. Alison emerges from her house and reads a statement she wrote. In the statement she says that Mona is alive and in grave danger along with the other liars. Alison says that she “would do anything to be able to see her friends again.” Then, she looks in to the camera and begs Andrew if he is listening not to hurt her friends. Ezra and Caleb watch from the back of the crowd.

Alison heads back inside and Toby and Detective Tanner are in there – apparently they are setting Andrew up. The police think that Andrew is obsessed with Alison, and if he sees her on the news that he will come to her house and try to take her too – then they will be able to catch him. The police sit in the livingroom for hours, finally Alison receives a phone call from a restricted number. There is no one on the other line, someone is playing a creepy song over a record player. They trace the call – the cops are shocked when the tracker says that the caller is at Alison’s house.

Toby, Det. Tanner, and the rest of the cops spread out to search Alison’s house for “A.” They find a dummy sitting in the rocking chair with a pig mask on, the phone in his pocket rings. Tanner answers the phone and hears a pig squealing. Alison rushes out of the house while they are upstairs, and Ezra and Caleb are waiting for her outside. Tanner realizes that Alison pulled a fast one and orders an APB on her too. Toby tells Tanner that the song on the phone call was about an apple tree – and he thinks that Alison went to the Campbell apple farm. Meanwhile, Alison is getting ready to meet Andrew at the kissing rock, Caleb and Ezra are going to follow her and make sure she is okay.

Spencer, Aria, Emily, and Hanna are finally let out of their rooms – it is the first time they have seen each other in weeks. A voice over the loud speaker tells them to go to Ali’s room. They arrive and find boxes packed full of Alison’s stuff from her bedroom back in Rosewood. They begin rifling through the boxes. Alison’s friends find a newspaper and learn that Alison is out of jail – they realize that “A” went to go get the real Alison and he wants them to set up her room for her. Meanwhile, Mona is down in the hole. Charles shows up and shines a flashlight on her face – Mona begs him to let her out and cries that she will “be a good Alison from now on.” The liars begin setting up Alison’s room and find a note from Mon in the closet, she wrote “he’s going to kill me.”

At the police station Tanner is furious, the apple farm was empty. She asks Toby if he has any idea where Alison went but he lies and says that he has no clue. Tanner manages to get a partial print of Andrew’s license plate on a video from outside of Alison’s house – she puts out an APB. Alison heads to the kissing rock, Andrew isn’t there – but he left a car in the woods. Alison climbs in to the car and the GPS begins spitting out directions. She starts driving down the highway, Ezra and Caleb follow a safe distance behind her.

In the bedroom Spencer whispers to the other liars that they are going to try and escape again that night – but first they have to find Mona and save her. She takes an Etch-A-Sketch out of one of the boxes that they are unpacking. She writes a note to the other girls on it and says, “Charles is a DiLaurentis.”

The GPS leads Alison to a state park in Pennsylvania, and then the car conveniently runs out of gas. Alison presses the road-side assistance button – but it is Charles on the other end, he tells her to open the trunk of the car. Ezra and Caleb argue over whether they should go check on Alison, or stay behind. Meanwhile, the police get a lead on the car Alison is driving – they rush to the state park. Caleb and Ezra arrive at Allison’s car and she is gone, they race in to the woods after her.

Inside the house the generator shuts off for a minute to reboot and the liars all race out of the bedrooms. Spencer tells the other girls that before they leave the house the have to open the vault – it is the only way that they can escape form the house. The alarms go off and the liars struggle to move a dresser where they think there is a passage way to the vault. Spencer leads the girls and they crawl through the passage way, they wind up in a room that they have never seen before. They find a video of Alison’s mom when Alison was a baby – and in it Alison has twin brothers!

Spencer knows that Charles is watching them over the security camera, so they start lighting all of his stuff on fire trying to get him to release Mona. Meanwhile, on another camera he is watching Alison stand in the middle of the woods, Caleb and Ezra find her.

In the bedroom the liars start panicking because the fire that they lit is burning too fast – they pull down a curtain to put out the fire and Charles is standing on the other side of the glass with a mask on and watching them. He pulls the fire alarm and the sprinklers come on inside of the house – the liars make a run for it to find Mona. Outside Alison, Ezra, and Caleb see smoke coming out of the ground and the hear the fire alarm – Ezra tells Alison to call 911 and starts trying to find a way in to the house.

The liars find Mona in the hole and are trying to figure out a way to rescue her, they get her out of the hole and run for the exit – Caleb, Alison, and Ezra are there waiting for them. The police and firemen arrive as Caleb and Ezra are comforting them. Spencer rushes to Toby and tells him that she knows who “A” is – she’s confused when Toby says that “A” is Andrew Campbell. The police find the other girl dressed like Alison in the basement – they rescue her and learn that she is Sarah Harvey, the missing girl who’s friends they met last year. Emily thanks Alison for helping save them – then she asks Alison who “Charles DiLaurentis” is…