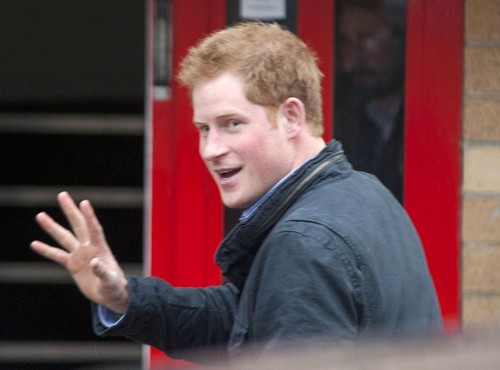 According to several new reports, Prince Harry will be leaving military service this year and won’t be returning to the army anytime soon – if ever. For those who haven’t kept track of Harry’s fairly illustrious military career, he’s already served two tours in Afghanistan and was expected to get promoted during his next tour. However, Sky News sources are alleging that Prince Harry’s definitely leaving military service this year, which is just as well. 2015 is looking to be a lot more dangerous than 2012, especially with the death threats against Prince Harry’s life from Taliban and other Islamic terrorist groups.

Most reports are claiming that Harry’s decision to leave comes at an opportune time, with sources explaining, “This is a natural time for Prince Harry to leave the Army. He could be expected to be promoted from Captain to Major next year, at which point he would undertake a nine-month course at the Staff College in Shrivenham. This sets you up for a long career in the Army. It is therefore a moment when a lot of young officers find themselves at a junction: to stay or leave and pursue something else.”

BBC’s sources are saying that Harry wants to focus on charity, but almost everyone seems agreed that Harry can’t and won’t stay in the army. However, most people aren’t focusing on the real reason that Prince Harry won’t be returning to active army service, despite him admitting that serving in the army was his passion: safety.

Prince Harry’s presence in any active operation would endanger himself and everyone he was with, especially after the Taliban have already threatened Prince Harry with murder. They know that assassinating Harry would be a huge boon to their cause, and they’ve publicly made their intent very, very clear. And the royals understand the risk of sending Harry into a potential combat role, especially with the Taliban still present, and now ISIS added to the mix. At this point in his life, Prince Harry has nothing to prove to anybody, and going abroad just to get killed and sent home in a box won’t help anybody – much less his fellow soldiers fighting alongside him who become targets as well.

Prince Harry visits the Armed Forces and Veterans Launch Pad, which provides accommodation and support for veterans, in Newcastle, England on February 25, 2015 by FameFlynet