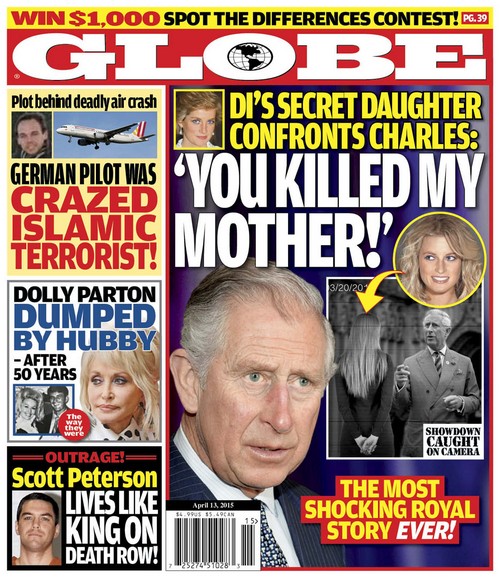 Does the late Princess Diana have a secret daughter? CDL reported on GLOBE Magazine’s story regarding Princess Diana and Prince Charles’s secret daughter, who they refer to as “Sarah,” weeks ago – but with Kate Middleton set to go in to labor any moment now with the spare heir, the story has gained a lot of traction on the Internet. After all, if Prince William and Prince Harry do have an older sister out there – wouldn’t she technically be in line to take the throne before Will and Kate’s children, even before Prince William himself?

How is it even possible for Princess Diana and Prince Charles to have another child out there? Wouldn’t we remember Diana being pregnant for nine months? Well, the story truly is remarkable. Per GLOBE Magazine and book titled “The Disappearance of Olivia,” before Princess Diana could be married to Prince Charles, Queen Elizabeth ordered a doctor to examine her and ensure that she could get pregnant with royal heirs. The doctor even went as far as to extract Diane’s eggs and fertilize them with Prince Charles’ sperm to ensure that the two would have no issues conceiving. Afterwards Queen Elizabeth ordered the doctor to destroy the fertilized eggs – but he had other plans. He actually stole Charles and Diana’s embryo and took it home and implanted it in his own wife.

Sure, the story is remarkable – but the bottom line is it is also very possible. Princess Diana was forced to visit a doctor to have her eggs examined and to ensure she was fertile, believe it or not Kate Middleton went through the exact same procedure as Diana before she was allowed to marry Prince William. The only way to prove whether or not “Sarah” really is Prince Charles’ daughter would be for the future King to agree to a DNA test, and we all know that will never be allowed. The Royal Family is trying desperately to keep “Sarah” under wraps and out of the media – which only further fuels speculation that she is actually Will and Harry’s sister.

According to an April edition of GLOBE Magazine, Sarah actually travelled to Kentucky for a super secret meeting with Prince Charles – and there are some photos from security cameras of the future King arguing with his alleged daughter. Sarah reportedly met with Prince Charles to beg him to take a DNA test so that she could know the truth about her heritage, but he refused. Prince Charles stormed off in a huff and according to GLOBE as he was leaving Sarah accused him of “murdering her mom Diana.”
What do you think about Princess Diana and Prince Charles’s secret daughter? Have you read the book “The Disappearance of Olivia?” Is Sarah telling the truth about her father stealing the Royal embryos? Let us know what you think in the comments below!