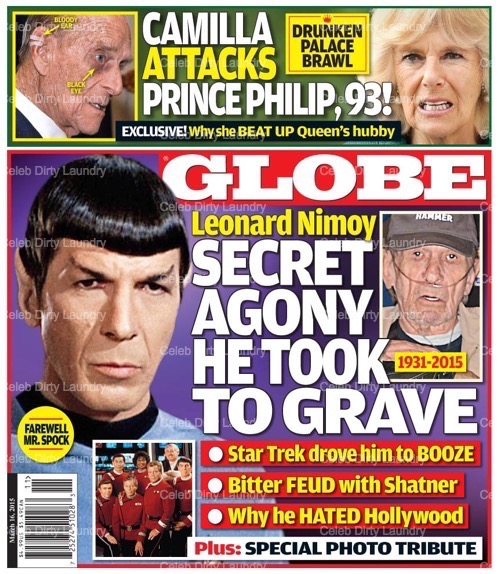 Prince Charles’ drunk wife Camilla Parker-Bowles has officially blown any chances she had of being named the next Queen of England – after she beat up Queen Elizabeth’s fragile 93 year old husband Prince Philip in a drunken rage. Prince Philip recently was spotted with a black and blue eye and bandages on his ear, and apparently his wounds are a result of a drunken blow-up with Camilla at the Palace, which ended with Camilla Parker-Bowles being kicked out of the Buckingham Palace and Queen Elizabeth ordering Prince Charles to divorce her.

According to the March 16 edition of GLOBE Magazine, “The incredible clash [between Prince Philip and Camila] took place during an informal visit to Buckingham Palace when boozing Camilla decided to relax for a few hours, swigging her favorite gin and tonic in a sitting room close to Philip’s private office. The sight of Camilla downing the Palace booze as she lolled in an armchair sent the crusty old Prince in to a rage.” GLOBE’s Palace insiders go on to explain that Philip ordered Camilla to return to Clarence House immediately – and Prince Charles’s drunken wife didn’t take too kindly to being ordered around.

GLOBE Magazine goes on to reveal that all hell broke loose and Camilla Parker-Bowles threw a glass of gin and tonic in 93 year old Prince Philip’s face, after he called her a “bloody disgrace.” The glass of gin to the face caused him to stumble backward and fall and hit his head on a chair – which caused his black and blue eye and bloody ear. Camilla Parker-Bowles is already on notice with the Royal Family, and her drunken blow-up with Queen Elizabeth’s hubby is the last straw. According to GLOBE Magazine, “Queen Elizabeth immediately forbid Camilla from entering the Palace for any reason. She then summoned Charles to a meeting with her and Philip in her private sitting room. She told him [Prince Charles] there could be no more excuses, no matter what it cost he had to divorce her.”

With Camilla Parker-Bowles ousted and her and Prince Charles’ imminent divorce underway, Queen Elizabeth is determined to appoint Prince William to the Throne before she has no choice but to step down – whether or not Prince William and Kate Middleton will take on the responsibility willingly is an entirely different story. What do you think of Camilla and Prince Philip’s drunken brawl at the Palace? Will Camilla spill the Royal Family’s secrets once the divorce is final? Let us know what you think in the comments below!