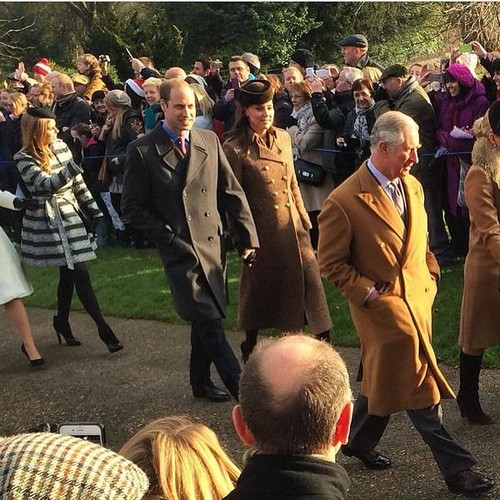 Prince George’s absence can be explained in a thousand different ways – he was tired, he was cranky, he was crying, his parents were afraid that he would wreak havoc on the church and/or grab the toupee of some poor sob’s head. George is a terror in public, and Kate Middleton and Prince William might have just been trying to prevent an international incident from happening by keeping him home.

However, Camilla Parker-Bowles doesn’t have the excuse of being a toddler, so why wasn’t she there? A Clarence House official told US Weekly that Camilla’s absence was due to a ‘health’ issue, and we all know what that means, don’t we? Drunk and hungover!

The statement read, “The Duchess put her back out earlier in December and has been in pain and is receiving physiotherapy. The doctors have advised against any travel.”

Riiiiight. ‘Health issue’ and ‘pain’. She was completely set to attend the service a few days ago, and then suddenly started having pain and receiving physiotherapy? I’m not sure I believe this story, and I think it’s much more likely that Camilla Parker-Bowles just had too much to drink, go too drunk, and was too hungover to attend the Christmas Day Church Service. I mean, Camilla’s reputation with alcohol can’t all be made up, and at her age, drinking and attending church the next day probably isn’t recommended.