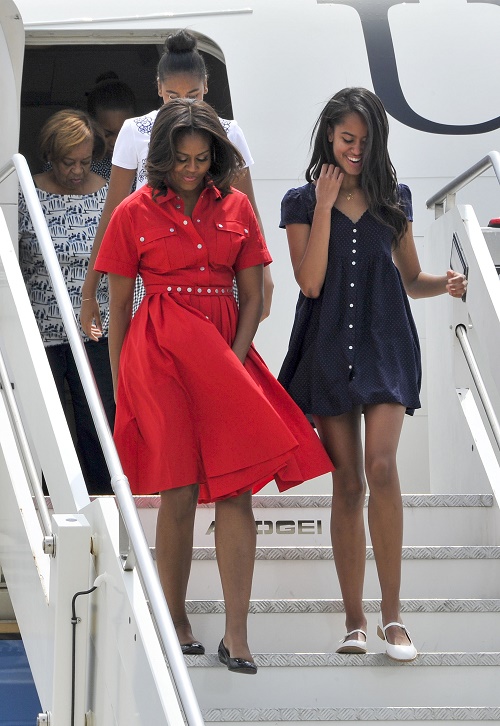 Queen Elizabeth totally snubbed Michelle Obama! Michelle was reportedly counting down the days until she and her mother and two daughters arrived in London. She couldn’t wait to introduce them to the royal family and Queen Elizabeth. But the royal family didn’t exactly give Michelle the red carpet treatment – as a matter of fact, they totally ignored her, and gave her a sit-down with Prince Harry. Prince Harry is cool and all, but he’s not exactly the Queen of England; he’s not even the future King of England.

According to the July 6 edition of GLOBE Magazine, not only did Queen Elizabeth snub Michelle Obama, but she ditched the President’s wife so that she could go to the horse races. GLOBE Magazine’s royal family insider dished, “Michelle Obama is on the Queen’s enemies list. When she attended an extravagant reception and banquet with the President in 2009, Michelle sparked an international outrage by putting her arm around the Queen’s shoulder. Making matters worse at a 2012 pre-Olympics event Michelle deliberately upstaged Prince William’s wife Kate by wearing a dazzling designer top that cost almost $7,000.”

So, let this be a lesson to everyone: if you dress better than Kate Middleton, then Queen Elizabeth will choose to spend the day with horses over you, and you will have to spend the afternoon sipping tea with Prince Harry. Then again, Michelle Obama’s teenage daughters probably didn’t mind meeting Harry, but we’re sure the conversation wasn’t exactly insightful or intellectual by any means.

Do you think that Michelle Obama is intentionally trying to upstage the royals, or is Queen Elizabeth being a little ridiculous? How long is Michelle Obama going to be on the “enemies list” because she wore a shirt that was worth more than Kate Middleton’s? Let us know what you think in the comments below!