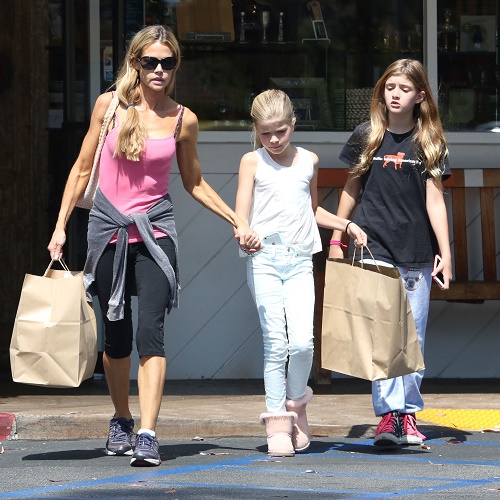 Is Denise Richards joining the cast of Bravo’s Real Housewives of Beverly Hills? Brandi Glanville and Kim Richards were both recently fired from the popular reality TV show, so it stands to reason that Bravo is looking for some new Beverly Hills housewives to fill the void in the cast, and rumor has it that Denise Richards is at the top of the network’s wish list.

Rumors have been floating around for years that Denise Richards was joining the RHOBH cast, but it looks like this time they will actually come to fruition and Bravo is in desperate need of a replacement for Brandi Glanville and Kim Richards. The July 13 edition of OK! Magazine reveals that Denise joining the RHOBH cast is definitely happening this season – and her ex Charlie Sheen is panicking about what she will say about him while the cameras are rolling.

OK! Magazine’s insider dished, “The contracts haven’t been finalized but it is essentially a done deal.” Remember on Father’s Day when Charlie Sheen went berserk on Twitter and announced that Denise Richards was the “worst mom alive” Well, according to the magazine’s sources, Charlie Sheen went over the deep end on Father’s Day because that was when he learned that his ex Denise had signed on to the Bravo reality TV show. I think it’s safe to say that Charlie won’t be making any star-studded cameos on RHOBH.

Real Housewives of Beverly Hills just began filming their new season, and so far Denise Richards hasn’t been spotted with the other housewives. But Bravo could just be trying to keep the newest addition to the cast under wraps like they did last season with Eileen Davidson. Do you think Denise Richards will fit in on RHOBH? Will she be able to fill the void left by Brandi Glanville? Let us know what you think in the comments below!