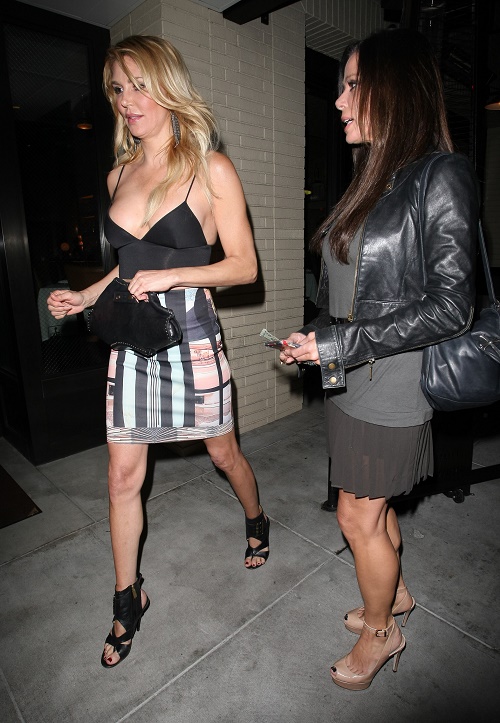 Real Housewives of Beverly Hills fans were shocked when it was confirmed that Brandi Glanville was OUT, and Bravo was not filming her for Season 6 of RHOBH. It’s still unclear exactly what caused Brandi Glanville’s exit. To hear Brandi tell the story, she quit the show and they were begging her to stay. But, according to everyone else, the Bravo producers cut her from the Real Housewives cast because she wasn’t bringing in the ratings like she used to, fans were over her drama, and she wanted way more money than she was worth.

Now, according to Brandi, she is in talks with the Bravo producers and will still be appearing on Season 6 of Real Housewives of Beverly Hills. Now, we take everything Brandi says on Twitter with a grain of salt – after all, she is a prolific drunk tweeter. But Brandi took to Twitter on August 19 and tweeted that she was headed out to dinner with her RHOBH producer and joked that they “were still friends.” When Brandi’s fans tweeted that they would miss her on Real Housewives, she tweeted back, “you may still see me if schedule permits.”

At this point, who knows whether or not we will see Brandi Glanville on Real Housewives. It seems like every other week she is teasing that she is busy working on a project or “in talks” with Bravo over her non-existent spot on the RHOBH cast. Brandi’s Twitter followers are beginning to doubt whether or not she even has a big project in the works, so the validity of her tweets seems to be decreasing rather quickly. Brandi most recently took a jab at Lisa Rinna; it looks like she is trying to stir up drama so that Bravo will take her back.

Do you want to see Brandi Glanville on Real Housewives during Season 6? Could there be any truth to her tweets about filming? Let us know what you think in the comments below!