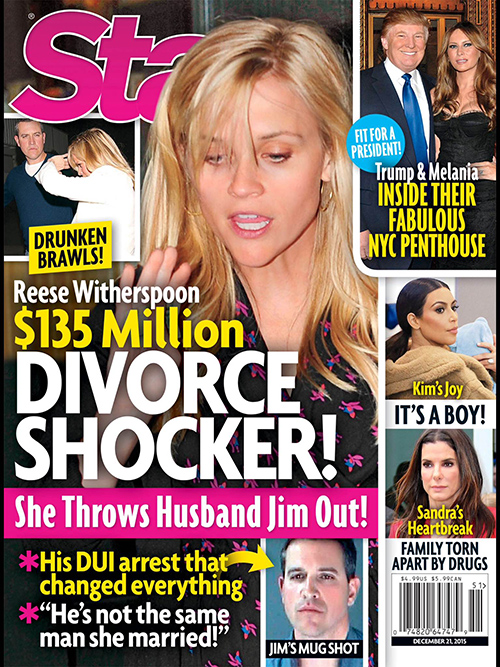 Reese Witherspoon is reportedly on the verge of divorce number two. The actress married Jim Toth four years ago, and their relationship is already falling apart – according to this week’s cover of Star Magazine. The headline screams, “Reese Witherspoon $135 Million Divorce Shocker!” The cover goes on to tease that Jim “is not the man that Reese married,” and she has apparently thrown him out of the house.

Reese Witherspoon and Jim Toth’s marital woes all boil down to one tiny thing – boozing. Reese and Jim’s drunken Bonnie & Clyde adventure which resulted in an incoherent Reese making a fool of herself on video while her husband was arrested for DUI was a pretty clear indicator early on that Reese and Jim’s relationship wasn’t the healthiest one.

According to Star Magazine’s inside sources, when Jim and Reese first began dating he basically put his career as a movie producer on hold for her. Now, he is back to working day and night – and he ignores Reese’s calls and spends little to no time with her. The insider added, “Reese says that Jim is not the same man that she married.”

The report goes on to reveal that Jim Toth and Reese Witherspoon are basically separated all ready – they are sleeping in separate bedrooms and spend zero time together. However, there are two huge reasons they haven’t filed for divorce, and might not do so any time soon. First of all, Reese is mortified at the idea of being divorced twice (after her first marriage to Ryan Phillippe ended). Reese goes above and beyond to make her and Jim’s marriage appear to be perfect for the media.

Secondly, Jim Toth and Reese Witherspoon’s divorce would be very messy and very expensive. An insider added that on top of having to face the music and be ridiculed for another failed marriage, “the thought of splitting their combined $135 Million fortune scares Reese as well.” Who wouldn’t be overwhelmed by that – that’s a lot of money on the line!

Do you guys think that Reese and Jim will be able to work through their differences? Or is this the beginning of the end of their short marriage? Let us know what you think in the comments below!