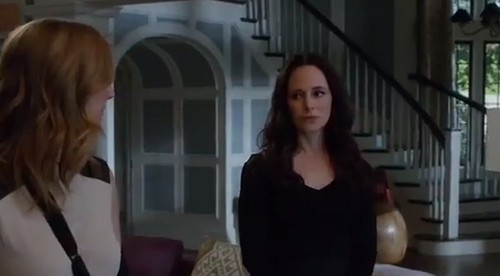 Revenge spoilers, synopsis and sneak peek video for Season 4 episode 12 “Madness” promise revenge fans a great episode full of action and deep intrigue. If you missed Sunday’s episode 11 we have the recap for you right here. Daniel Grayson’s [Josh Bowman] death hit the Hamptons hard on Revenge, but it’s also caused Emily Clarke [Emily VanCamp] and David Clarke [James Tupper] to realize where their loyalties lie. According to the press release from ABC, Season 4 Episode 12 ‘Madness’ spoilers reveal that Emily and David will turn their back on the Hamptons for good, with Emily helping Nolan [Gabriel Mann] with a takedown, while David goes after Victoria Grayson [Madeleine Stowe].

The promo shows as much, revealing David telling someone that he’s told Victoria to meet him at the lighthouse, followed by Emily saying, ‘I’ve sacrificed my whole life for this moment’. What could that moment be but her long-earned and long-gestating revenge against Victoria, especially after Victoria refuses to let her come to Daniel’s funeral? Even after everything that happened between them, Daniel died to keep Emily safe, but she couldn’t say her good-byes because of his mother.

Then again, it’s always more complicated than playing a simple blame game on Revenge. As David tells Emily, they’d be having her funeral instead of Daniel’s if things had worked out differently. We’ll have to see if Emily and David actually go through with their plan to get even with Victoria, once and for all, especially with Daniel out of the way. From a logistics point of view, I’m not sure how that’s going to work – can you really have Revenge without Madeleine Stowe? Then again, the show needs a desperate boost of energy, and Daniel’s death will only give them a short boon with storylines. Killing Victoria Grayson or even temporarily incapacitating her would require the writers to come up with a new big bad, and that might allow for some fresh faces and new energy to permeate the show.

What do you guys think about Revenge the Season 4 Episode 12 ‘Madness’ spoilers? Let us know your thoughts in the comments below and don’t forget to tune in on Sunday, January 11 at 10 PM ET to watch the live episode!