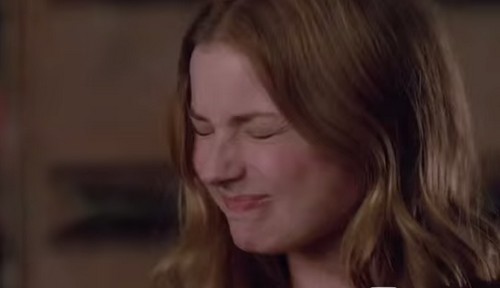 It’s only been a few episodes since Daniel Grayson’s [Joshua Bowman] death on Revenge, but the show’s already moved into a new subplot. Despite the previous few episodes focusing on Emily Clarke [Emily VanCamp] and David Clarke’s revenge against Victoria Grayson [Madeleine Stowe], Season 4 Episode 13 ‘Abduction’ spoilers show a whole different ballgame coming into play. The spoiler-filled video promo for Abduction shows Emily and Victoria trying to escape the clutches of their crazy and revenge-obsessed enemy, Malcolm Black [Tommy Flanagan].

For those who haven’t been keeping track of the show, Emily and Victoria get captured by Malcolm in Episode 12, and it looks like the majority of Episode 13 will focus on them trying to evade their captor.

There’s little chance the show will have the gall to kill off either Victoria or Emily [especially Emily], but in the promo video, a grim-looking Victoria tells Emily, “Who would have thought you and I would die together?” And therein comes the great twist – to escape Malcolm, Victoria and Emily will have to work together. After everything that’s happened between them, do you think they’ll be able to put aside their differences and actually work together to escape their crazy captor? Or will the differences become too much, leading to one [or both] of their deaths?

In the same video, Emily warns Victoria, ‘We need to move fast’, but unfortunately, it looks like Victoria gets caught. There are brief glimpses showing Victoria looking dead in Malcolm’s arms, and Emily grimacing as she looks away. But after killing Daniel Grayson just a few episodes ago, I seriously don’t think that Victoria will meet her demise – unless there were some contract negotiations with Madeleine Stowe that didn’t go well. Even then, TV shows [especially network shows] are great at pulling bait and switches, and this just seems like a ploy to engage viewers without having to work too hard.

What do you guys think about Revenge Season 4 Episode 13 ‘Abduction’ Spoilers? Let us know your thoughts in the comments below.