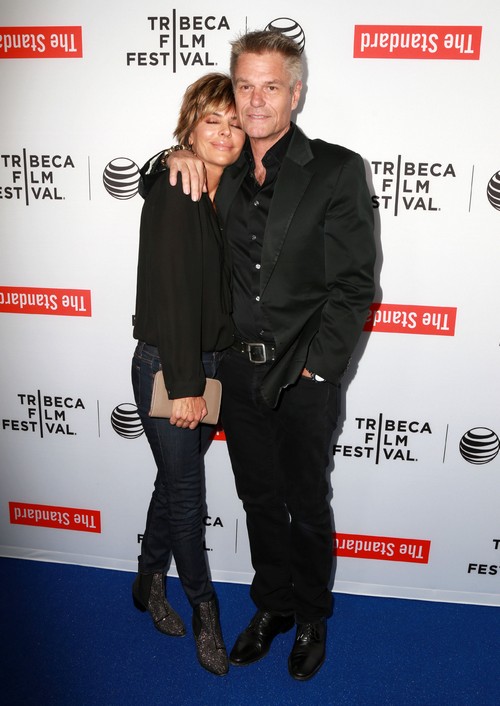 Former 80s soap opera actress, Lisa Rinna, 51, is on the attack again and her victim is Real Housewives of Beverly Hills recovering alcoholic Kim Richards. Ever since Lisa Rinna joined the cast of “The Real Housewives of Beverly Hills”, the public has seen another side to Rinna. For those who knew her career, they had only ever seen her scripted until RHOBH, now they see the real Rinna behind the scripts and it’s not pretty. Add to that, her newfound use of Twitter and a more complex and even uglier portrait has emerged, and Rinna can’t blame her violent and hateful Tweets on Bravo editing or television writers. 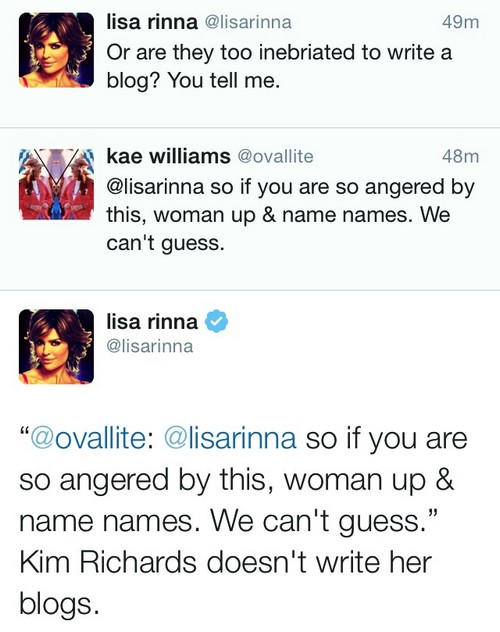 Rinna’s target of choice is once again, her RHOBH co-star actress Kim Richards. Why? Who knows? Kim Richards is the most private and quiet member of the cast. She rarely engages anyone other than her sister, Kyle Richards. Kim has never engaged in ugliness on Twitter. In fact, her Twitter is all sweetness and light with fans. So why is Rinna so bent on exposing her public hate of Richards? The cast doesn’t know; fans don’t know, and the Tweeters who continue to screenshot her angry attacks remain as confused as Richards herself – if she even knows. In any case, Richards continues to take the high road and has refused to engage online. Kim Richard’s last tweet was on March 13, wishing a loving Happy Birthday to her sister, Kathy Hilton.

To my beautiful sister who is always there for me @KathyHilton. Wishing you the happiest birthday! I wish I could be there with you today

The fact that Richards isn’t participating in the one-sided war hasn’t stopped the weekly and long-running “Mean Tweet”s from Rinna. It’s gotten so bad; one site is recording the amount of “mean tweets”, by certain housewives. Rinna is a forerunner. Only last week, it was exposed the Rinna had favored a deranged fan’s tweet that Rinna should have attacked petite actress Kim Richards “with a tire iron in a back alley”. Rinna added, “I love U,” to the violent tweet before ReTweeting it.

Lisa Rinna continues her ugly obsession with Richards, even though, the season wrapped last year. What is so odd is that the two actresses had no history and had never even met prior to Rinna joining the cast of RHOBH last year. Rinna arrived on the RHOBH without a plan or a story line to engage fans and viewers. It’s become more than obvious; Rinna decided her storyline would be her weekly maligning of Richards. Now she is even public policing Richards Bravo blogs. One begins to wonder if Rinna was ever taught to mind her own business. This behavior has carried on to the reunion specials too. Her patent explanation or excuse for her obsession with Richards is that “she cares”. However, “care” is not a word viewers of RHOBH or Twitter users would use to describe Rinna’s conduct. 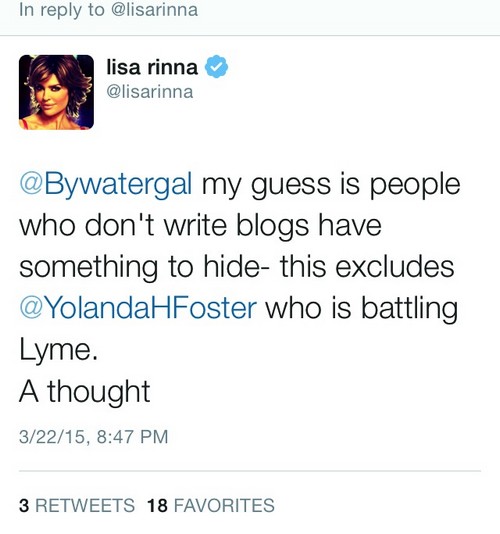 Richards is indeed a recovering alcoholic who professes to have been in recovery and sober for three years. Her friends and family, Richards lives with her son and ex-husband, state they have never seen her sobriety breached in that entire time frame. However, fans of the series can vouch that Richards was indeed “out of it” on one episode earlier in the season. That episode was filmed last summer. Richards later admitted that prior to filming that episode, she had taken a powerful pain pill given to her by her terminally ill ex-husband. The pill was obviously much too strong for the tiny Richards, and audiences saw she was obviously drugged.

Richards was admitted to the hospital the day after filming suffering from pain that was diagnosed as being related to fractured ribs, a hernia, and disc issues. Fans later learned that the actresses long bout of pneumonia and violent coughing had contributed to her painful injuries. In retrospect, the explanation makes perfect sense to many, but not to Rinna. The day of filming, Richards was driven out to the Malibu house of actress Eileen Davidson, anticipating the long day, she accepted a pain med. Sobriety experts state that any breach is a relapse. However, Richards did not include her sobriety, sobriety coach or doctors on the series, which makes fans wonders, why has Lisa Rinna made Kim Richards health part of the series? That part of her life is private, and she has requested Rinna allow her and her family to their privacy. Rinna refuses.

That night of the pain pill was the one night last year; Rinna won’t let it go. Many wonder why she has a dog in the fight. They two actresses are not friends, do not socialize and do not travel in the same circles. But, Richards has been the target of addiction and sobriety gossip by Rinna for months without end. Tonight on Twitter Rinna struck again. A Rinna fan was taking pot shots at RHOBH Kim Richards and again, Rinna engaged with the “troll”, favorited the comment adding a nasty comment at the end before Retweeting. Tonight’s ugliness centers around Kim Richards not submitting an after episode RHOBH Bravo blog after a recent episode and an allegation that Richards doesn’t write her own blogs because she is inebriated or refuses because she has something to hide. Rinna excludes co-star Yolanda Foster who has also not turned in blogs recently. Rinna excuses Foster as she is suffering from a debilitating bout of Lyme’s disease. 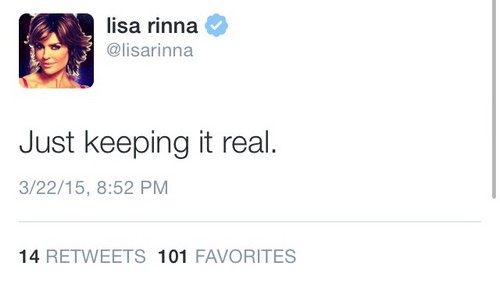 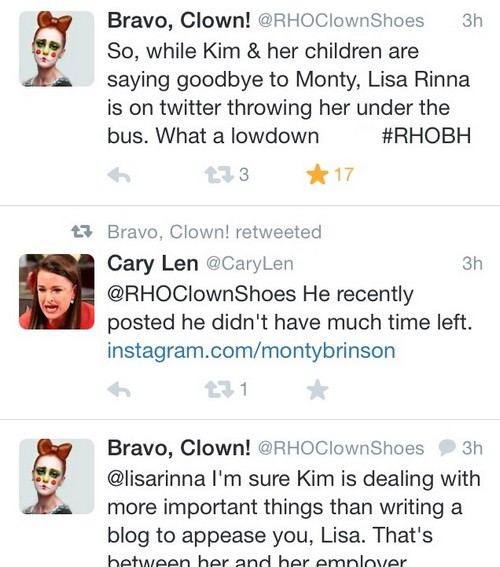 Again, Richards is not even online and has not been in weeks. Richards is caring for her terminally ill ex-husband, Monty Brinson, the father of her youngest daughter, Brooke. Brinson has lived with Kim for almost a year, what may be the last year of his life. Who knows what Richards is experiencing this month? All we know she is offline leading her private life privately and Rinna is calling her a drunk and stating she has something to hide if she has an employee write her blogs or is drunk or something of that nature. It is sometimes hard to the decipher the exact context of innuendo and hate in Rinna’s “mean tweets”, but there is no difficulty in seeing Lisa Rinna’s Mean Tweets are being driven by hate not “caring”.

@lisarinna @ovallite and again you are policing her? You have a real obsession with her.