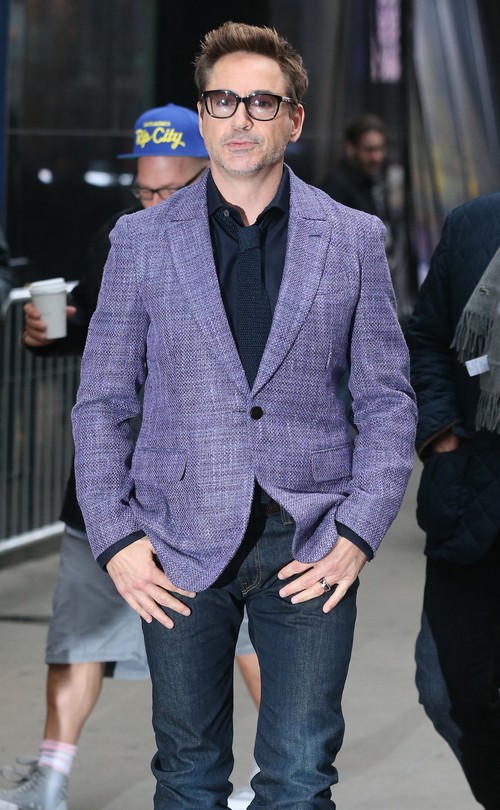 Robert Downey Jr. is currently promoting Avengers: Age of Ultron, so of course, he’s traveling with a huge security entourage. However, a source from Page Six reveals that not only is the entourage massive [and ‘fit for a king’], but the security detail is almost equally as ridiculous.

Apparently, Robert Downey Jr. had lunch with his family at ABC Kitchen on Sunday afternoon, with sources adding, “The security operation to get him and his entourage to the restaurant was insane. You would’ve thought it was the president. His security blocked cars coming into the garage until Downey was in his car.”

You know what’s telling? That Robert Downey Jr.’s rep didn’t expressly deny the story, instead stating very simply, “Robert had brunch on Sunday at his father’s favorite restaurant, ABC Kitchen. Security was invited to attend as guests, along with other family members and friends.”

Well, Robert Downey Jr. has spent decades in Hollywood, has seen countless Hollywood celebrities fall because of the paparazzi and invasion of privacy, and has a very young child and a wife he seems hell bent on protecting at all costs. Plus, he’s Robert Downey Jr. – he’s paranoid. You think he has to act much when he’s playing Iron Man? Not really.

Anyway, he’s already admitted that he’s paranoid, and so, it makes complete sense that he would have this much security when he went out in public places. Sure, it might not actually be necessary, but when he has the money, who are we to begrudge Mr. Big Movie Star whatever he wants? He wants to protect himself from the media, the paparazzi, and the crazed Avengers fans that want his autograph in the middle of the street. I mean, to be fair, you never know when you’re going to run into a dangerous or unstable person – especially when you’re THAT famous.