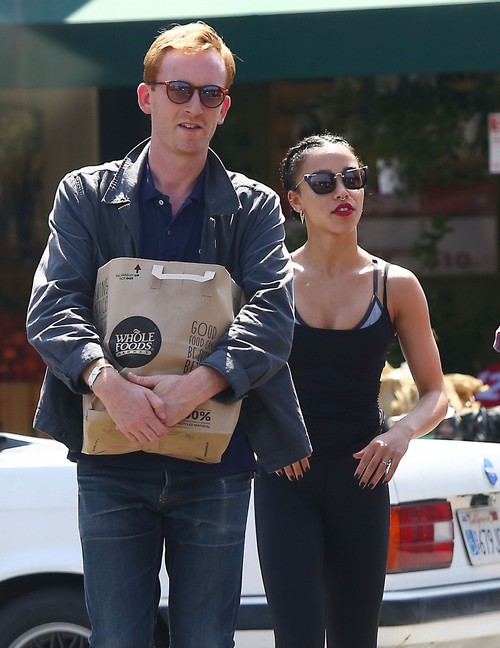 Thanks to Rob’s fame, FKA Twigs has become a target for everyone looking to cash in on Pattinson’s huge fan base and Twigs uses this shamelessly. Everyone wants an interview with Twigs, and the music industry wants to book her in the hopes Rob will be part of the package.

Before Robert, FKA Twigs was hardly a household name and she only is now because of RPatz, although Twigs seems to think she is a superstar! After dating the ‘Twilight’ heartthrob and enjoying the spoils of become his fiancé, Twigs’ attitude suddenly changed and the singer has become solely focused on her career to the point she is pushing Rob towards mainstream roles. The longer Pattinson stays in the limelight, the longer FKA Twigs will enjoy the benefits of being Robert Pattinson’s fiancée.

Twigs’ changing attitude has been a key part of why they initially delayed their wedding. Robert noticed that FKA Twigs, born Tahliah Debrett Barnett, went from wanting a small, pub-style wedding to a grand spectacle filled with her new celebrity pals. Of course, none of the cast or crew from ‘Twilight’ would be invited thanks to Twigs’ resentment of Kristen Stewart continuing to be associated with Pattinson.

FKA Twigs has been spending her time in the United States, while Rob works in Belfast. Of course, it doesn’t help that when the two do have time to mesh schedules, Twigs opts to sit in the front row of Versace fashion shows. Rob and Barnett did eventually met up later for dinner with pals, but it was clear that Twigs put the opportunity to rub elbows with Donatella Versace first.

Robert and Tahliah haven’t broken up, but the strain of Twigs’ hunger for fame is definitely causing problems for the couple behind the scenes. Where Pattinson tries to remain private and aloof, FKA Twigs is open to saying anything that will grab attention.

Most recently, Twigs talked to Paper magazine about her “throbbing” sexuality saying, “Obviously Björk is a very sexual and beautiful woman, but she often keeps her sexy on a down-low. I don’t really do that. I throb. Do you know what I mean? I have that throbbing energy, and I accept it, and I harness it when I need to. It’s not even a conscious thing.”

What do you think of FKA Twigs and Robert Pattinson’s relationship? Will their engagement eventually be called off? Are the two drifting apart thanks to Tahliah Debrett Barnett’s insatiable hunger for fame? Let us know what you think in the comment section below.

FKA Twigs and a friend by FameFlynet