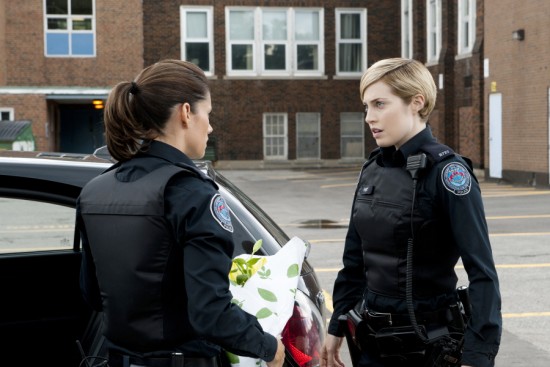 Tonight on ABC ROOKIE BLUE continues with an all new Thursday July 23 season 6 episode 5 called “A Real Gentleman.” We’ve got your recap down below! On tonight’s episode Traci [Enuka Okuma] is a no-show at her first raid, which leads her compatriots at the 15 Division to believe she must have been kidnapped by the notorious gun dealer they are after.

On the last episode when Nick’s estranged older brother Finn emerged with new information regarding someone directly linked to their parent’s death, Nick goes off the grid to track the man down. But Juliet noticed Nick’s odd behavior and did some investigating of her own. Meanwhile, Dov and Chris successfully captured an escaped MMA fighter only to leave Dov feeling as though something was missing. Did you watch the last episode? If you missed it we have a full and detailed recap, right here for you.

On tonight’s show per the ABC synopsis “Traci is a no-show at her first raid, which leads her compatriots at the 15 Division to believe she must have been kidnapped by the notorious gun dealer they are after. As they work to find her, Andy and Gail come to another frightening conclusion with the realization that a serial rapist could be to blame for Traci’s disappearance.”

Tonight was supposed to be Traci’s big day. Yet a chance occurrence from a few months again ended up destroying everything she was trying to achieve.

Remember the serial rapist from a few episodes back. Yeah, well, he returned on tonight’s all new episode of “Rookie Blue” and he snatched Traci right out of a public parking lot. Apparently while the squad has pretty much forgotten him, he never exactly forgot Traci.

Thus he snatched her and sent all of her friends into panic over what could have happened to her.

See, just before the abduction, Traci was arranging her first ever raid on an infamous firearms ring. So if successful this would have been the thing to push her career forward. And stop a large amount of trafficking in illegal weapons. However Traci never made it to her own raid.

She received a call from her son’s school claiming that he was sick and, with a few extra minutes she had to spare, Traci was going to pick him up and drop him off at the sitter’s. But when she got to the building, her son was fine and the principle said that there might have been a misunderstanding. And it was because there was that doubt – Traci hadn’t suspected that something else was going on.

In fact she felt silly for overreacting the way she did and was going to rush back to the station when someone chloroformed her in her car.

And hours later, as she was waking up in someone’s basement, her friends began to realize that picking up a kid shouldn’t be taking that long. So Andy and Gail went to go find Traci. Meanwhile Sam took over Traci’s position and started in on interrogating the arms dealers.

The man he was left with, however, was a particular vicious man and so he noticed how much the surrounding officers were worried about a Traci Nash. And then he toyed with them. He made it appear that he knew where she was and that she got what was coming to her.

And with him already being so on edge, hearing a criminal play with them over Traci’s whereabouts just set Steve the boyfriend off.

Steve attacked the man and then he got benched from the case for being a little too involved. But, luckily, Sam was still able to find out something on Traci. He picked up the arms dealer was baiting them. And his suspicion was confirmed when Andy reported a bouquet of flowers left in Traci’s abandoned car.

So that’s when everyone realized who had taken Traci and called in Detective Inez from Sex Crimes. Since they’ve last seen her, Inez has found a viable suspect. She believed a Clarke was responsible for the balcony rapes but sadly only had circumstantial evidence to back her up.

Clarke never had an alibi during any of the attacks and he was considered a low grade sex offender. The only thing he’s ever gotten caught on was sexual harassment. Yet the red alert popped up for him once Inez figured out he’d been talking on the dark web with ore heinous offenders.

And so Juliette volunteered to check out what he’s been up to online.

Neverind that such skills were never mentioned in her files. At that moment, the young officer was more concerned with finding one of her own than she was with her cover at the station.

Though, the rest of the guys brought Clark in for questioning when they found out he had called in sick the morning Traci was snatched. And Andy instantly recognized Clarke fro when he attacked her in Traci’s apparent. It seems, even with a mask, she remembered how distinctive his eyes were.

So they did find their guy but thanks to both his admission about hating flowers and Juliette’s expertise – they now know he had a partner for everything.

And it was this partner that grabbed Traci while Clarke really was at the doctor’s. The barista at the coffee shop that Traci frequented has been dismissed early onas a possible suspect because of an alibi he had during the attack. But the same way a partner worked for Clark – it worked for Corey. So Corey was the one that took Traci and the cops eventually found him with a weapon is his hand trying to hurt their friend.

See the partnership went like this: one guy would attack the girls and the other would simply watch after sending them flowers.

But by bringing them both into custody, the two men were going to be charged for assault and conspiracy. Now that’s good news for Traci but she was still shaken up from her ordeal and only wanted to be with her son and Steve.

Leo Nash had handled everything pretty well. Although if his “aunt” Gail hadn’t been there to constantly keep him upbeat then Traci might have been dealing with a very frightened son. So Gail ended u coming through on this one. And her exercise in watching Leo helped her feel a little les nervous about becoming a mom.

Yet Chris had his own epiphany after the married woman he’s sleeping with had broken into his apartment and tried to make him do drugs with her.

It seems he finally realized that she’s too messed up for him to be around.