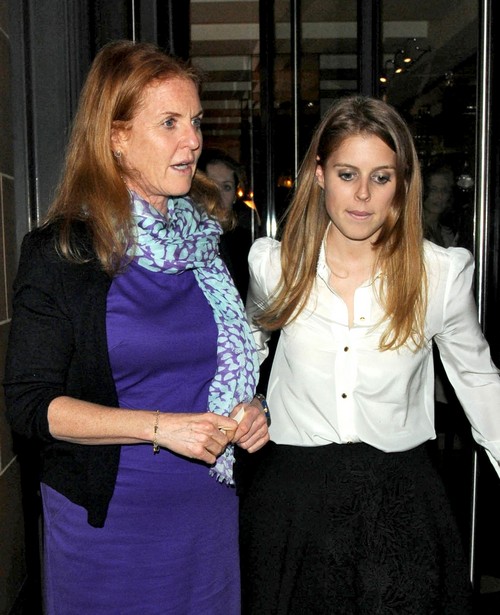 While Prince Andrew has been the focus of an underage sex slave scandal, but have we forgotten about the Duke of York’s former wife Sarah Ferguson, AKA Fergie, The Duchess of York? Sarah Ferguson and daughters Princess Beatrice and Princess Eugenie have no choice but to react to the devastating details of the Prince Andrew sex slave scandal released by Jane Doe #3, Virginia Roberts – how is the scandal affecting them?

Though Sarah Ferguson, divorced Prince Andrew, Duke of York in 1996 after a four-year separation, the two still lived together and supported one another over the years, even more so recently. Just last November, Fergie had attended an official engagement in an effort to support her ex-husband. Their daughters, Princess Beatrice, 26, and Princess Eugenie, 24, attended the event as well.  Shortly after, the Duchess of York was given permission by Queen Elizabeth to host a charity event in the state apartments at Windsor Castle, with the Duke of York on hand to help the Duchess.

That closeness may soon end as Fergie, Beatrice and Eugenie are shaken by the allegations that have been brought against their former husband and father, respectively. Sarah Ferguson is especially sickened because the accuser, Virginia Roberts, was so young at the time the alleged sex scandal took place. She thought of how tragic that would be for any mother to hear about their young daughter, and cannot believe her ex, commonly known as Randy Andy, would take advantage of a young girl, when he is the father of two young daughters.

Princess Beatrice is throwing back champagne with rowdy pal Bee Shaffer, daughter of Anna Wintour, in the Caribbean in an effort to escape the hurt and anger she is feeling towards her father. Princess Eugenie escaped with Cressida Bonas, former flame of Prince Harry, to the Swiss Alps. Both are trying to keep busy and stay far away from their father right now. Neither Princess Beatrice or Princess Eugenie believe their father’s denial of any wrongdoings. They’ve known about their father’s reputation for years and don’t doubt that he could have been involved in the sex scandal.

Having returned early from holidaying, Prince Andrew had to face his mother, Queen Elizabeth obviously to discuss the allegations, and likely to plan for damage control. If that wasn’t bad enough for the Duke of York, it is now being reported by The Telegraph that police sources have confirmed the Duke of York may face a Scotland Yard investigation over the sex abuse claims made by Virginia Roberts if she makes a formal complaint about him.

A police spokesperson said of the sex abuse claims, “We have not received any allegations at this stage. If we did receive a complaint we would investigate it. We are, of course, duty bound to investigate any allegation of a crime that is made to us, regardless of the nature of the allegation.” Looks like this is just the beginning of a very scandalous story that will surely rock the entire Royal family.